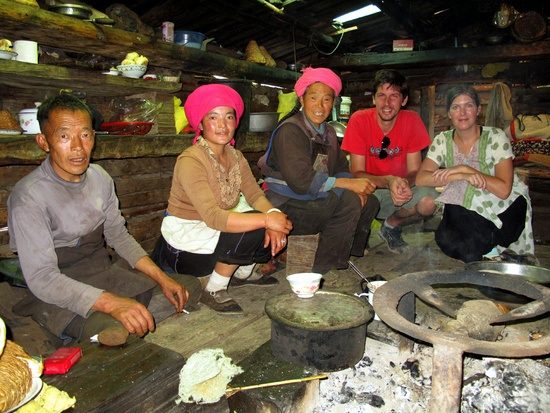 Claire and Iain with Tibetan nomads in the hills around Shangri-La.

Teaching Traveling: Readers, are you interested in how to combine epic world travels with volunteer teaching abroad? Iain and Claire of Old World Wandering Travelogue will inspire and assist you in this dream by sharing their unbelievable story.

Iain and Claire, tell us a bit about your background.

Iain: Claire and I are both South African, but for the past eight years we’ve lived overseas and travelled for long stretches. We started off in London, straight out of university, managed a pub in the English countryside a year later, and spent eighteen months making our way from there to Shanghai overland.

China sucked us in for three years; if we hadn’t wanted to travel again – to explore as much as we could between A and a distant B – it might have sucked us in for good, but last year we packed up our Shanghai lives and started on another overland journey, this time to Cape Town, which we still call home. 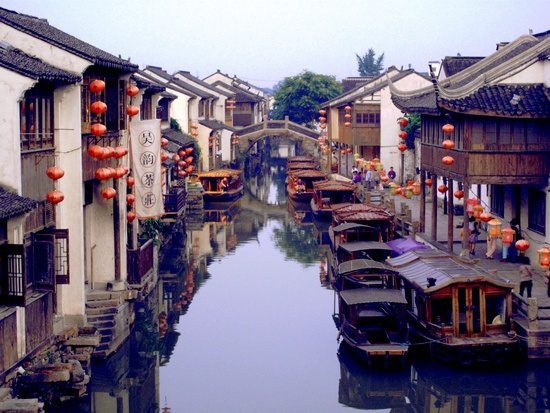 The Shantang Canal in Suzhou, near Shanghai, China.

We resuscitated our travelogue when we left. Both of us were lucky enough to publish books while we were in China and writing about our journey has become as important to us as the journey itself.

TT: Tell us more about your journeys!

Claire: In January 2011, Iain and I packed our backpacks, gave away everything we could and began an overland journey to Cape Town. Although we were excited to travel along the route we’d planned, India was calling and, instead of leaving from Shanghai’s train station, we made a beeline for Mumbai, to bathe ourselves in the steaminess and spice of a country that has us both smitten.

Three months later, with our appetites sated, we flew to Bangkok and waded through the damp monsoon heat of Southeast Asia’s mainland, zigzagging for a few months before entering China from north Vietnam. 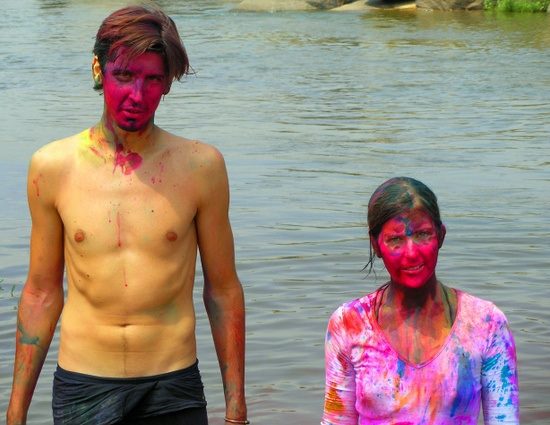 Claire and Iain after Holi, India’s festival of colors.

China’s MSG-seeped food, its modern lookalike cities, its people with their regionally-accented Mandarin, and all the little idiosyncrasies that we’d grown to love or hate during our three years there came rushing back as soon as we crossed the border.

It was a flood of China, ready to sweep us up in its current and carry us through a country that we knew well, but had explored little. And for thirty days we did explore; through Yunnan and Sichuan and Chongqing, until our visa required us to do a border run before returning. We exited at Hong Kong – China, but not China – and ended up staying for six instead of two weeks, thanks to the hospitality of friends.

Excited to get back to the mainland, we went to Hong Kong’s border with Shenzhen, where China – and a friend – were awaiting our return. But it was not to be. Our visas – despite having nothing besides an ‘Enter Before’ date, with which we’d complied – had long since expired. 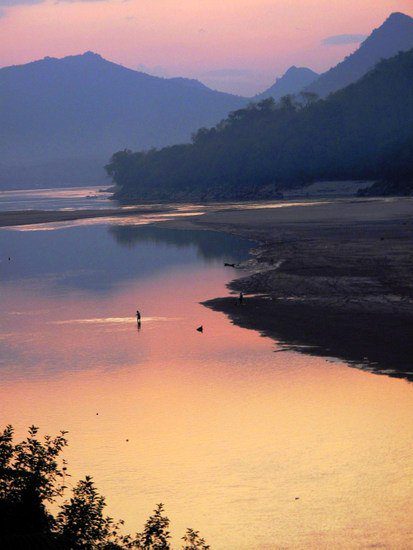 Back to Hong Kong we went, heads hanging. Our friend was understanding and crossed into Hong Kong, but Chinese immigration was not so kind. When we arrived at a Chinese government-run travel agent, we discovered that, as South Africans, we would not be granted more than seven days in the mainland: too short for anything but scurrying back to Southeast Asia on almost non-stop buses and trains. Defeated, we bought the cheapest available plane tickets to anywhere that wasn’t China. It happened to be Vietnam.

Having circled and looped through Southeast Asia for five months already, we were compelled to begin doing so again. It wasn’t just China’s visa policies that were against us; the seasons were too. It was already November and, while most of China was still mild, our exit point – Kyrgyzstan – would be frozen over by the time we reached it. So Southeast Asia it was, at least until Central Asia’s snow thawed.

Vietnam’s sticky humidity had left, and Hanoi was cooler than anywhere we’d been that year. We stayed until our month-long visas expired, and headed south to “The Most Beautiful City in Southeast Asia,” Luang Prabang, Laos, where we found the peaceful pause we needed after a month in hellish Hanoi.

Winter turned to spring, but still we stayed in Luang Prabang, and seriously thought about putting down roots – right there. We might have let ourselves stay even longer than three months, but Iain’s father announced that he was going to Thailand and we went to meet him. 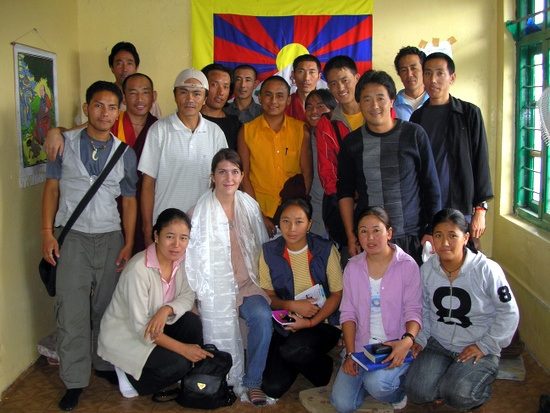 Claire with her students: Tibetan refugees who live in McLeod Ganj, India.

Central Asia’s snows have long since melted and we’ll cross China’s borders again in about a month. It has been a strange experience, planning our return to China; planning, delaying and building it up all at once. It contains some of the apprehension of going home, but is in fact closer to the reverse.

From China, our journey really begins: a journey that moves West along a progressive route, not through a series of circular paths. All the water treading of the past year will end, and we will commit to the challenge we first undertook, by going west through Central Asia, Iran and part of the Middle East.

A ferry between Jordan and Egypt will mark my return to a continent I haven’t seen in close to three years. We’ll follow Africa’s east coast, crossing the equator in Kenya, and continue south, until we reach the continent’s tip at Cape Point. Then, we imagine, we’ll finally be home. 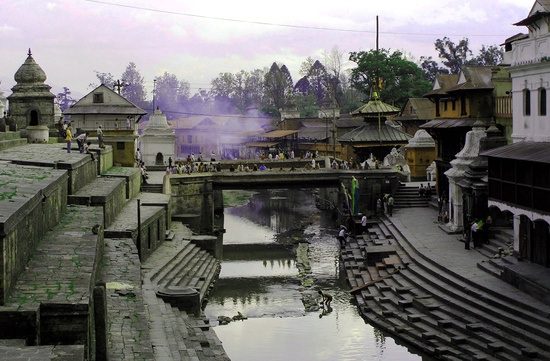 TT: AMAZING! How did you find the money to fund your trip?

Iain: We work on the road, writing for two financial quarterlies based in Hong Kong. Work has transformed the structure of our journey: we live in places as often as we pass through them, carrying some of the expatriate habits we picked up in Shanghai around with us. This is both good and bad. We have more time in every place, to build relationships and sample food, but deadlines limit how much we can explore and sometimes prevent us from being completely spontaneous.

TT: How did teaching come in to your travels?

Claire: The two months in 2007 that we spent as volunteers, teaching English to Tibetan refugees in McLeod Ganj, was among the most memorable periods of my life. McLeod Ganj in northern India is home to the Tibetan government-in-exile, and spending time every day with its community gave us a real sense of Tibet’s difficult history. It wasn’t the best introduction to China, of course, but we valued being able to hear the Tibetan point of view before being bombarded with propaganda in China. 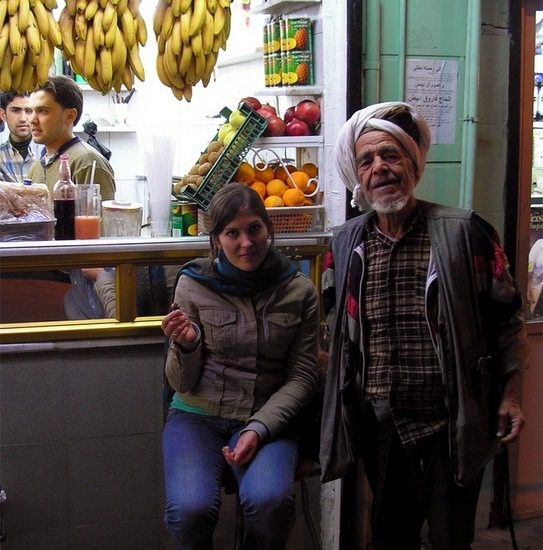 Claire with an eccentric shepherd in Aleppo, Syria.

Knowledge and experience, though, were only second to the relationships I built with my students. Remembering standing in the classroom on my last day with a pile of white silk scarves hung around my neck – a Tibetan symbol of gratitude and respect – still makes me teary-eyed today.

TT: How has teaching had an impact on the way you travel?

Iain: Claire and I both taught English to adults in Shanghai. Teaching was an excellent introduction to the city; it gave us security, colleagues and a room full of students, who helped us understand China. We worked full time at different branches of the same English school for a year and a half. When we left, to devote our time to writing, we missed classroom interaction and began teaching private students.

A few of the most rewarding relationships we built in China started in a classroom, but teaching also made listening to clichés about China, struggled over by beginners, feel like work. Some of that impatience has carried over into the way we travel now.

We’re easily annoyed by people who talk at us, feeding us patronising tidbits about their own culture without listening to our questions or opinions. Although we’ve done it ourselves, while studying Mandarin, we’re also not as understanding as we should be when somebody wants to use us like talking dictionaries, to practice their English.

A monastery on the grasslands of Tagong, in Sichuan, China.

Despite our impatience, I think a genuine interest in communicating always shines through, and then it helps to speak broken English fluently, which we learnt to do in Shanghai.

TT: Thanks so much, Claire and Iain!

Readers, for more on this world-traveling couple, check out their Facebook Page, and find them on Twitter at @clairevdh and @iainmanley. Now, what questions and comments do you have?

Yep, this is exactly what it looks like when I go to one of those villages in China.