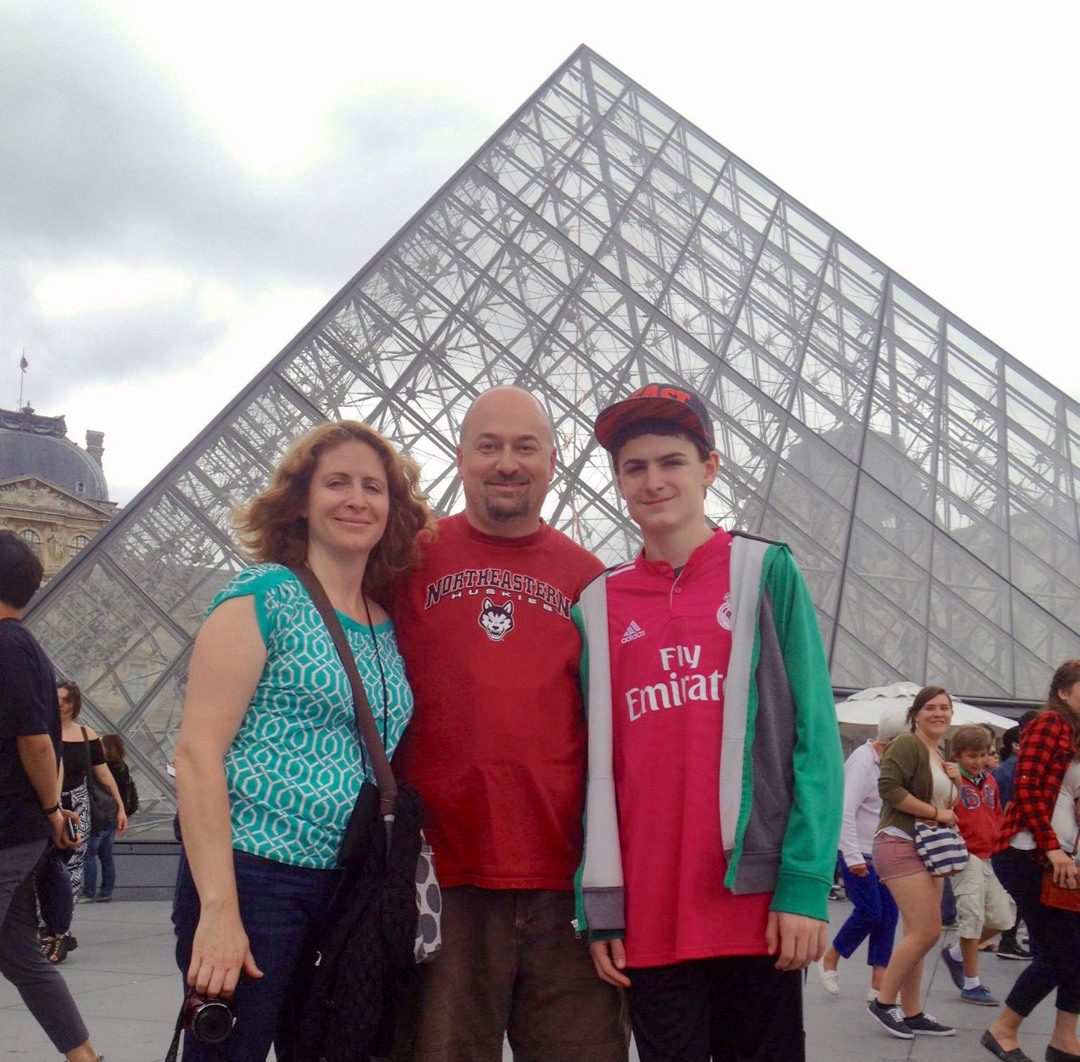 Shane and family at the Louvre in Paris as part of an exchange trip with students.

Teaching Traveling: Are you a Social Studies or History teacher interested in funded professional development opportunities that involve travel, either domestically or abroad?

Let’s welcome educator travel grant expert, Shane Gower, who will teach us about some of the best of these programs! Shane, tell us a bit about your background.

Shane: I am from central Maine and still live and work in the area. I have taught Social Studies for 20 years at Maranacook Community High School in Readfield, Maine and I live nearby in China, Maine. Both towns are near our state capital of Augusta.

I was the 2016 Gilder Lehrman Maine State History Teacher of the Year and am the current President of the Maine Council for the Social Studies. 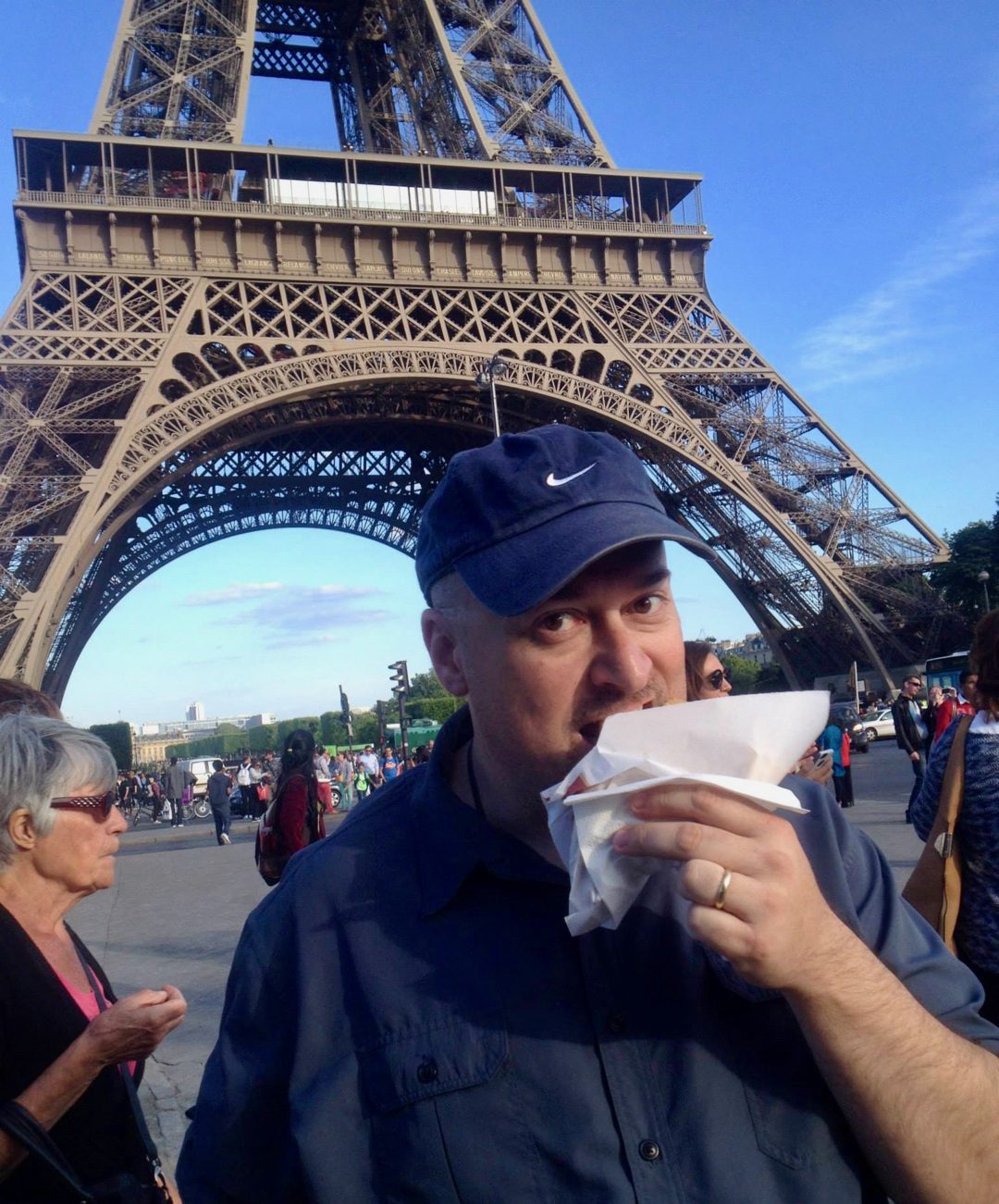 Eating a Nutella crepe at the Eiffel Tower in Paris.

I have been fortunate to travel in the summer as part of several Professional Development opportunities.

Most recently, I have been a part of the Understanding Sacrifice program that included travel to Europe sponsored by National History Day. (Keep reading for full details and links to this fully-funded program, and several others!)

Going earlier in my timeline, in 2006, I was selected to be a Transatlantic Outreach Program fellow and travelled to Germany through the Goethe Institute.

I have also participated in several NEH Landmarks of American History travel programs in Ohio, California, and Massachusetts

Next, I did two different Gilder-Lehrman Summer Institute travel programs in Massachusetts and Missouri.

Last year I traveled to France with a student as part of the Albert H. Small Normandy Sacrifice for Freedom Teacher and Student Institute. 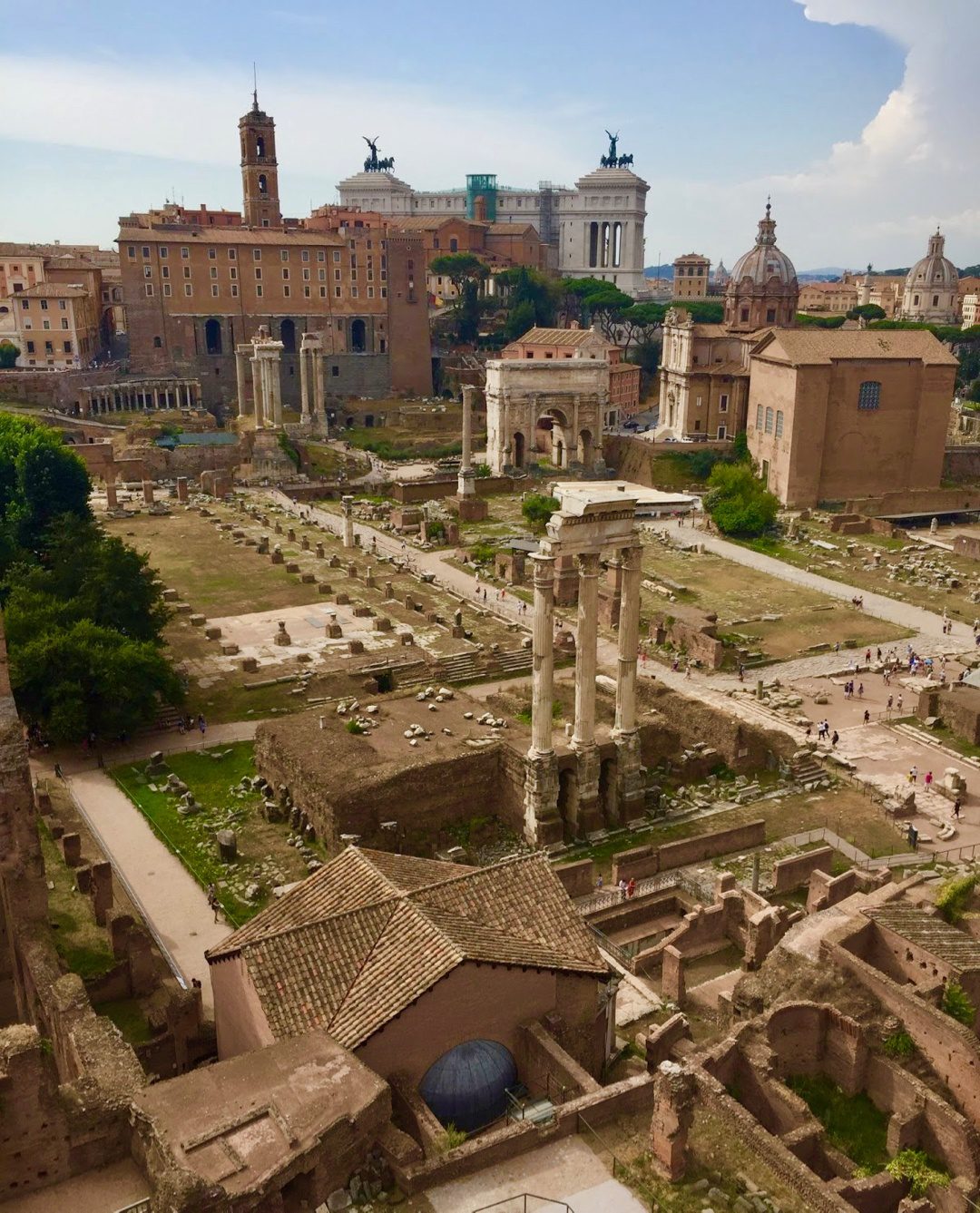 The remains of the Forum in Rome, Italy.

TT: Phenomenal! That’s an impressive list of teacher travel grants! Tell us more about your travels.

S: In July 2015 I was the teacher chaperone for a group of students from my school who did an exchange trip in France. I was able to take my wife and child as well. We lived in an apartment for 3 weeks in Vannes while the students lived with host families nearby.

Then the French students traveled back with us and lived with my students’ families for 3 weeks. Students had to pay for airfare and a hotel in Paris. Chaperones were funded in exchange for their responsibilities. 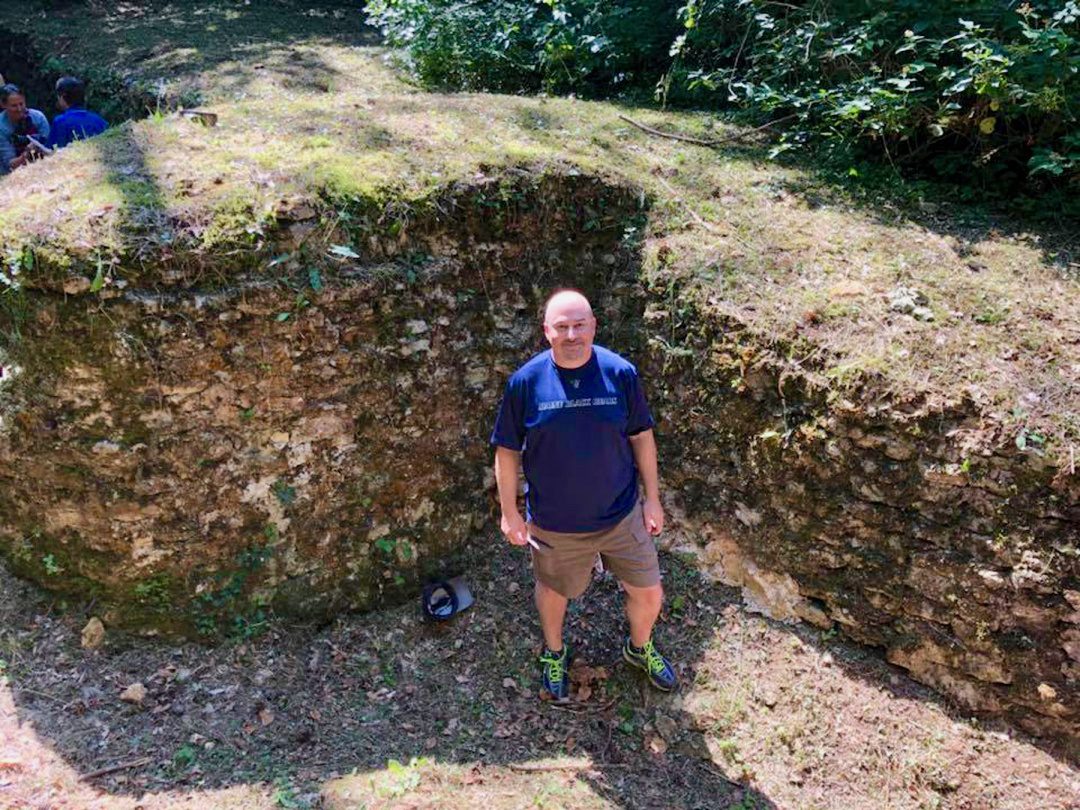 Shane in one of the preserved German trenches from WWII near Verdun, France.

TT: That sounds great. Can you give more details about the Understanding Sacrifice program in Europe?

S: In 2016 I was accepted into the professional development program, Understanding Sacrifice. This program asked teachers to choose a local Fallen Hero who died in WW2 and is buried in one of the American Cemeteries in Europe.

Then we spent the year researching this soldier in order to publish a profile of him and read a eulogy at his gravesite in Europe. Twenty four teachers from around the country participated. We also had to create lesson plans to incorporate the American Cemeteries.

This program was funded by National History Day and the American Battle Monuments Commission, the National Cemetery Administration and the WWI Centennial Commission. 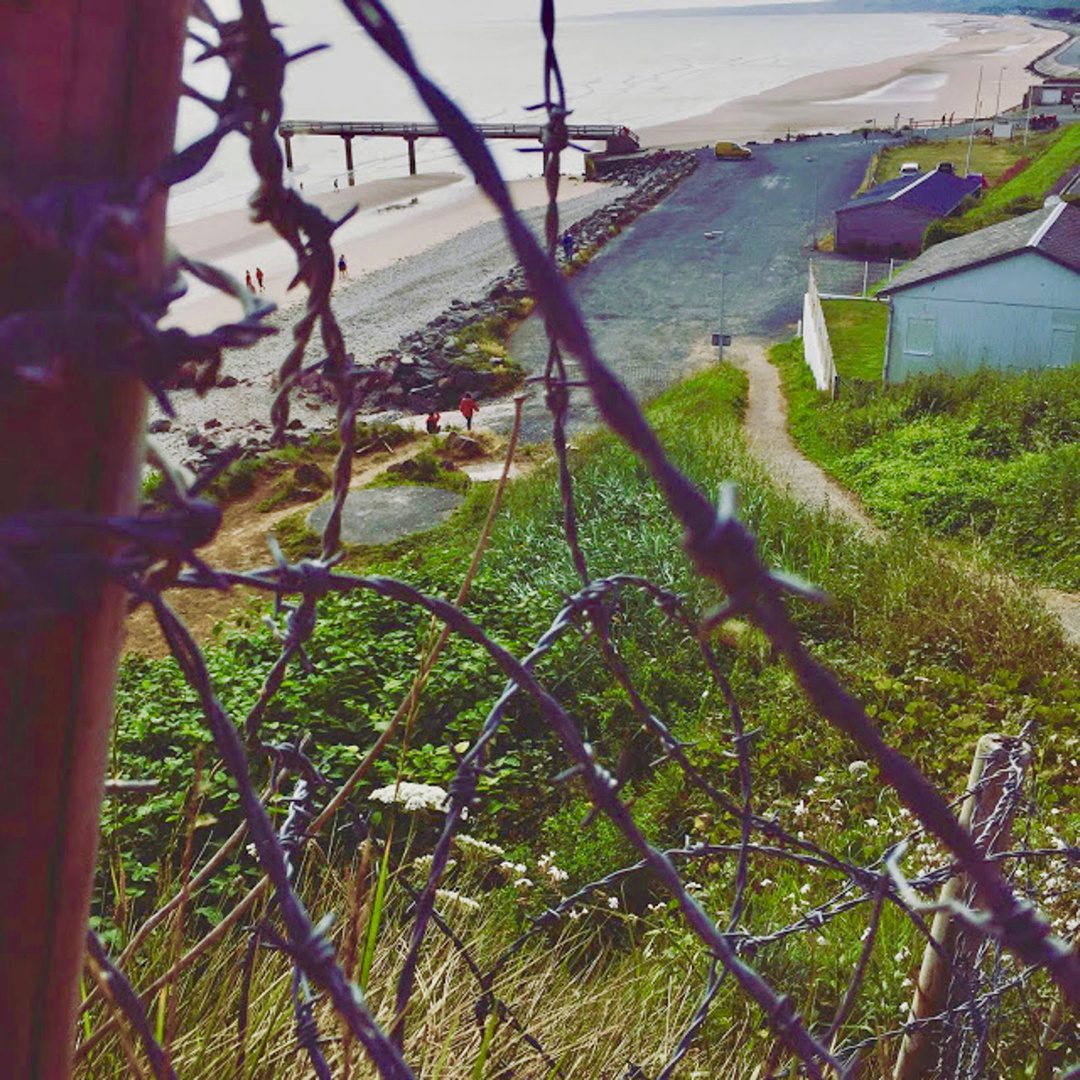 Looking down at Omaha Beach near Normandy, France.

TT: So powerful. What about the Sacrifice for Freedom program?

S: Another awesome professional development program I participated in was the Albert H. Small Normandy Sacrifice for Freedom Teacher and Student Institute.

This program is funded by philanthropist Albert H. Small, and asks for teams of a teacher and student from the same school to participate. Eighteen teams from around the country are selected.

For this program it was my student who did the research on a local soldier killed in WWII and buried in the Normandy American Cemetery. She created his profile for the website and she read the eulogy at his grave, though I traveled with her to the various sites as her chaperone.

We spent 5 days in DC touring historic sites and doing research before flying to France where we visited Utah Beach, Omaha Beach, Ponte Du Hoc, St. Mere Eglise and other historic sites and museums. On the final day students read their eulogy at the Normandy American Cemetery. 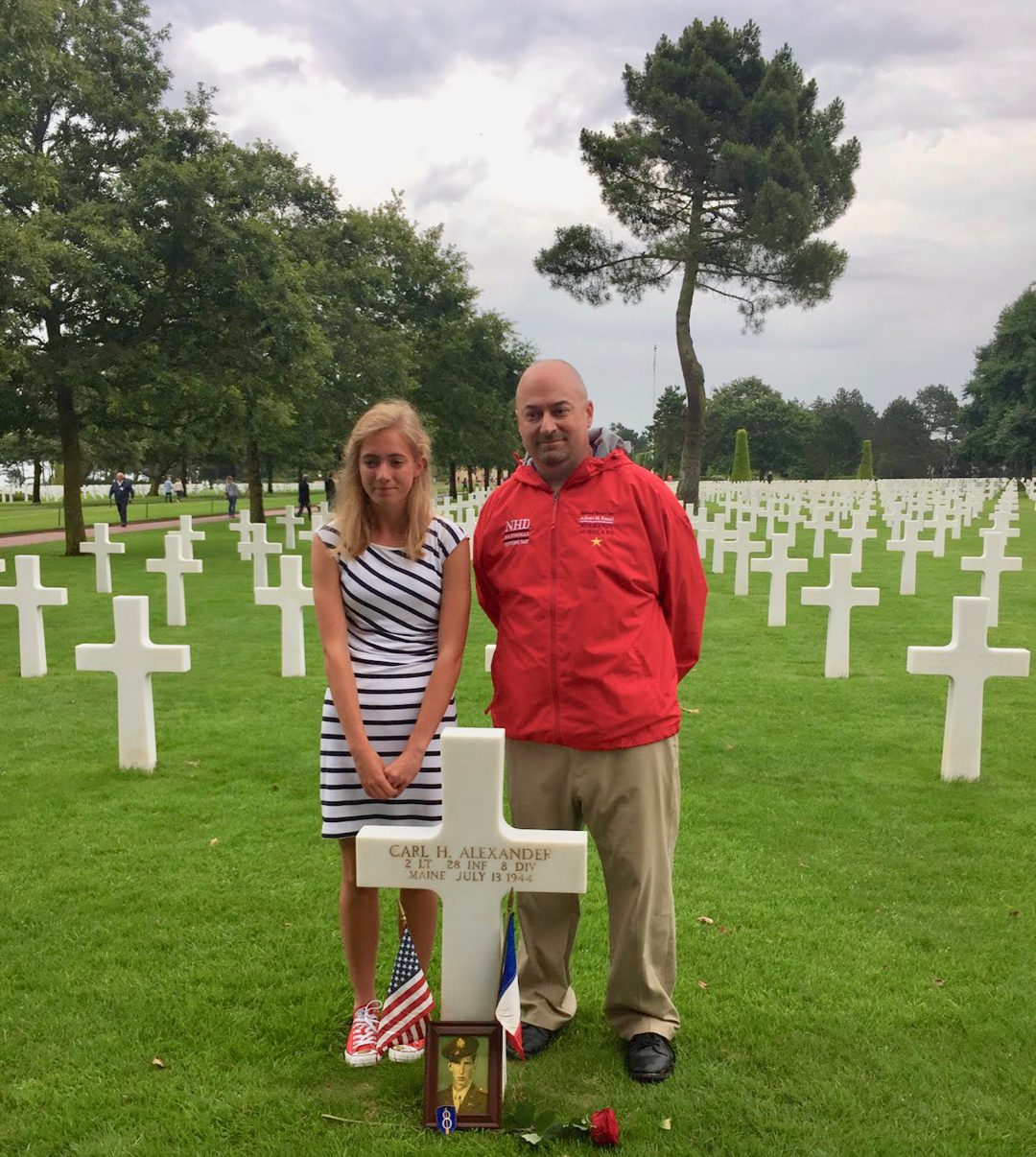 With a student near the grave of 2nd Lt. Carl H. Alexander of Maine at the Normandy American Cemetery in France.

TT: What a fascinating teacher AND student travel grant! Are there other travel research grants for History teachers that you’d recommend?

S: Just a month ago I returned from another Understanding Sacrifice type program called Memorializing the Fallen.

This program was again sponsored by National History Day and the American Battle Monuments Commission, but was also sponsored by the National Cemetery Administration and the World War One Centennial Commission.

For this program I chose a local soldier killed in WWI and buried in the Oise-Aine American Cemetery in France. I also chose a veteran who survived the First World War and is buried in Togus National Cemetery here in Maine. I am researching both in order to create an online profile for both.

I read a eulogy at the gravesite in France and will be reading another at Togus National Cemetery this Autumn. We are in the midst of creating lesson plans related to the World War One to be published in a book to help teachers commemorate the Centennial of the end of the war. 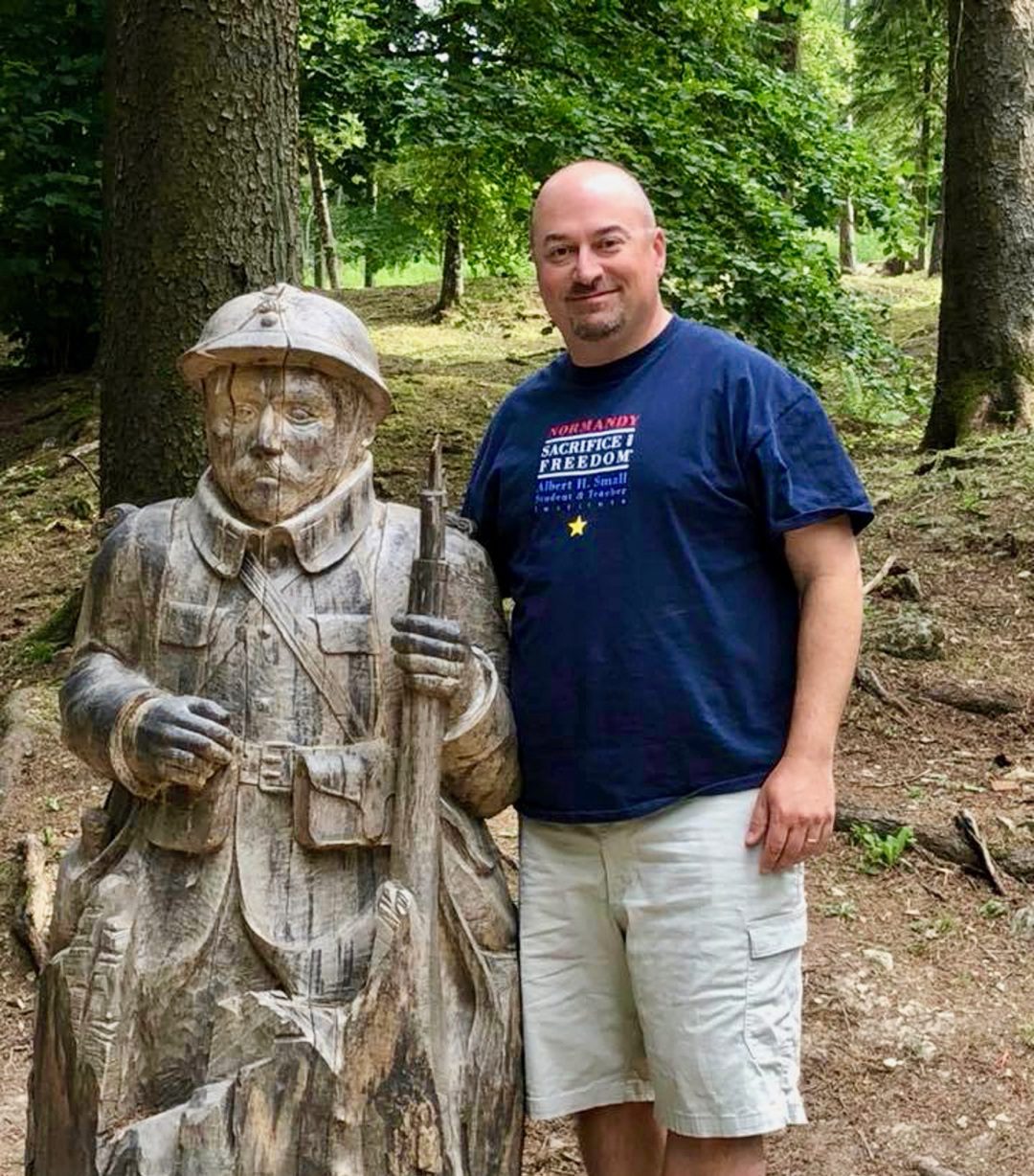 In the destroyed village of Fleury near Verdun, France. The village was completely destroyed in the Battle of Verdun in 1916. Someone has carved a French poilu into a stump in the village.

TT: Deeply moving. Now, how do you find your travel opportunities?

S: I have found that once you participate in one travel grant and create those connections with others, you are connected to the people organizing similar opportunities. It becomes much easier to be aware of these programs and know what is expected to be accepted and to meet the obligations.

In other words, once you do one teacher travel grant, it’s far easier to find and get into another!

National History Day is involved in a lot of opportunities, and so running NHD for students in my school has also helped. 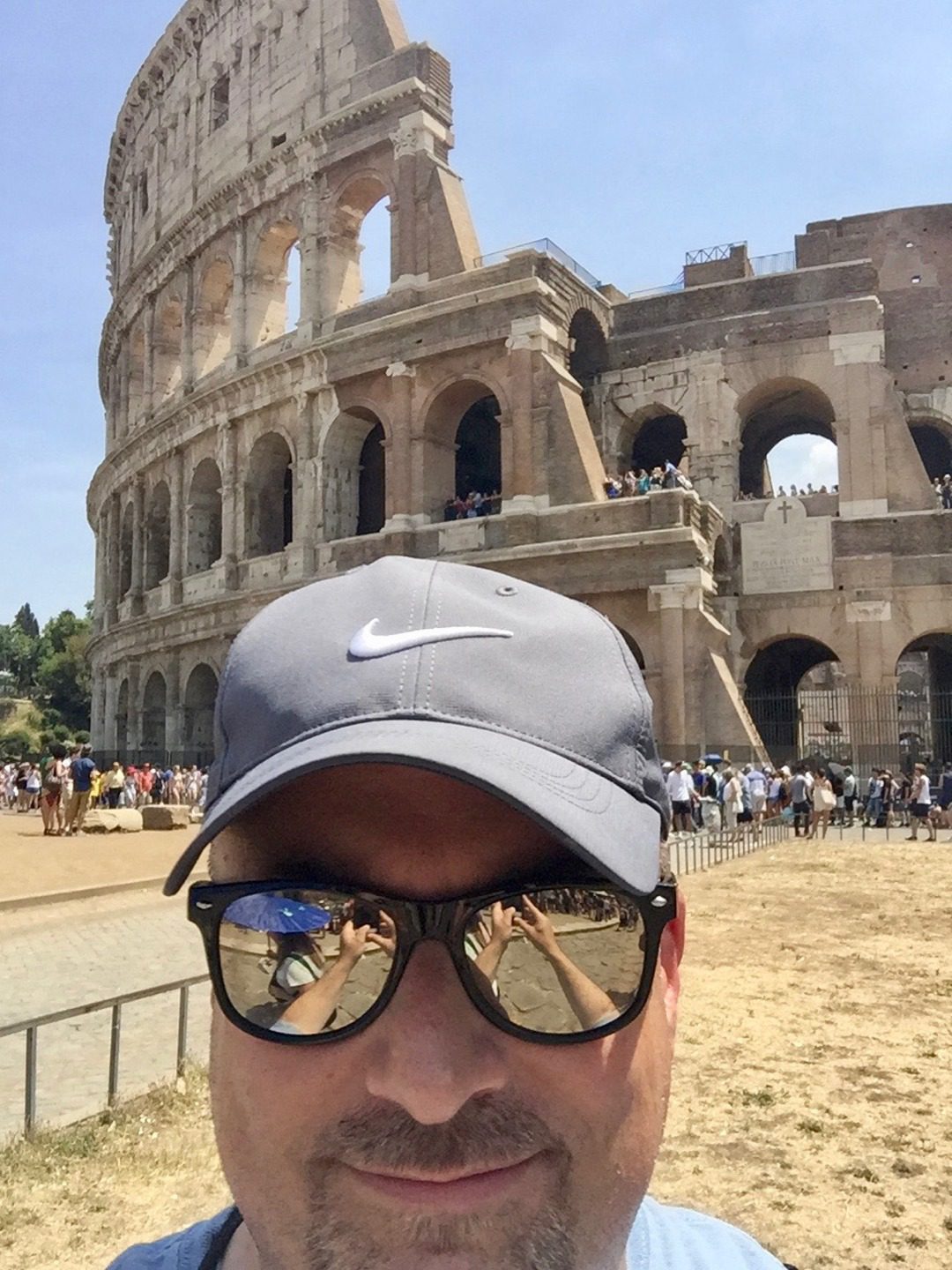 In front of the Colosseum in Rome, Italy.

TT: Great suggestions! So, how did you find the money to fund your travel?

S: I have applied to programs that provide teacher travel funding (sometimes you have to pay a small amount out of pocket — around $100 to $300 — but sometimes they pay for everything).

A view of Paris from Notre Dame Cathedral.

TT: Fabulous! Now, please tell us one moment from your travels that was particularly powerful.

S: The most powerful moment for me was visiting the Normandy American Cemetery in France with 17 other teachers and 18 students from around the country.

It was amazing to listen to each students bring their Silent Hero to life as they stood near the grave in Normandy and read what they had learned.

Through the reading of the eulogy it was clear that each had done authentic research, met the families of their Silent Heroes, and had a deep level of respect for the sacrifice each had made. We were standing just a short distance away from where they had come ashore 73 years prior and where so many had died.

Each student was deeply moved by the experience, as I think we all were. To hear and see young people show that level of understanding and respect gives me hope for the future and is a memory of that experience I will never forget. 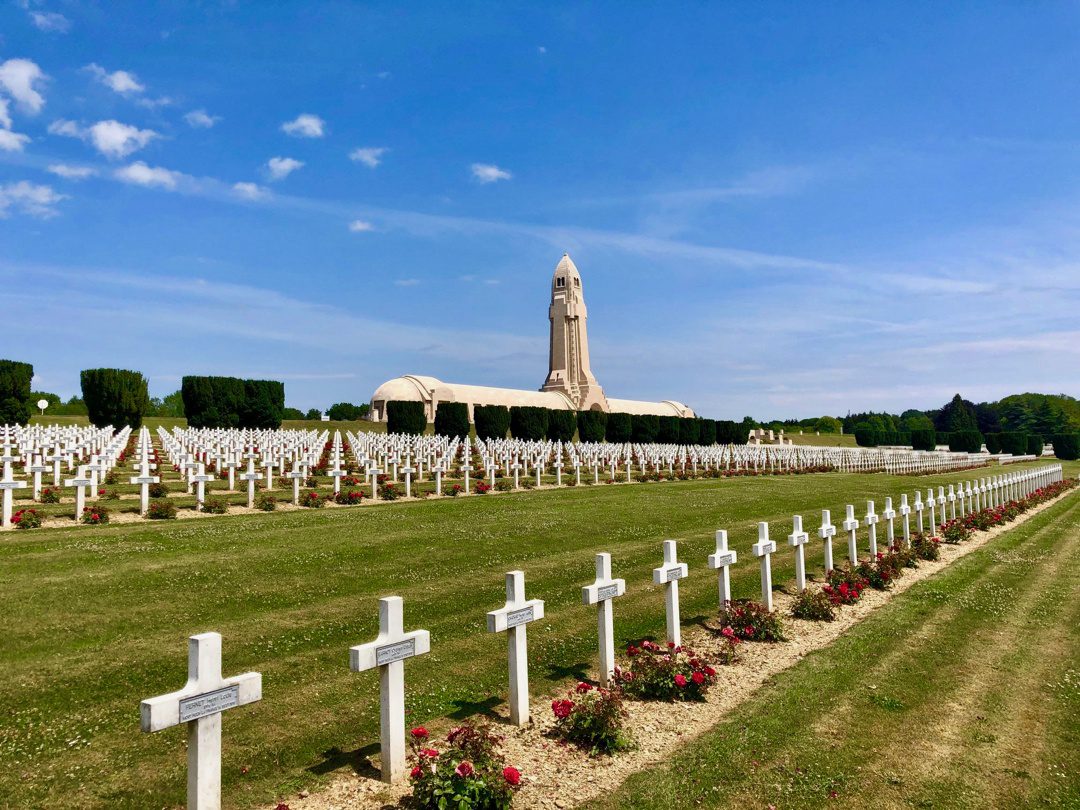 TT: What an experience for everyone involved. So, how have your travels impacted you as a teacher and as a person?

S: The work around telling the story of Silent Heroes from my local area who made the ultimate sacrifice in war has reinvigorated my classroom and my own personal passion. Nothing has brought history to life like these experiences.

In a similar way, the National Endowment for the Humanities Landmarks of American History Summer Institutes for Teachers also have inspired me. There is nothing like the power of place and the power of memory to bring this work to life and give it meaning. 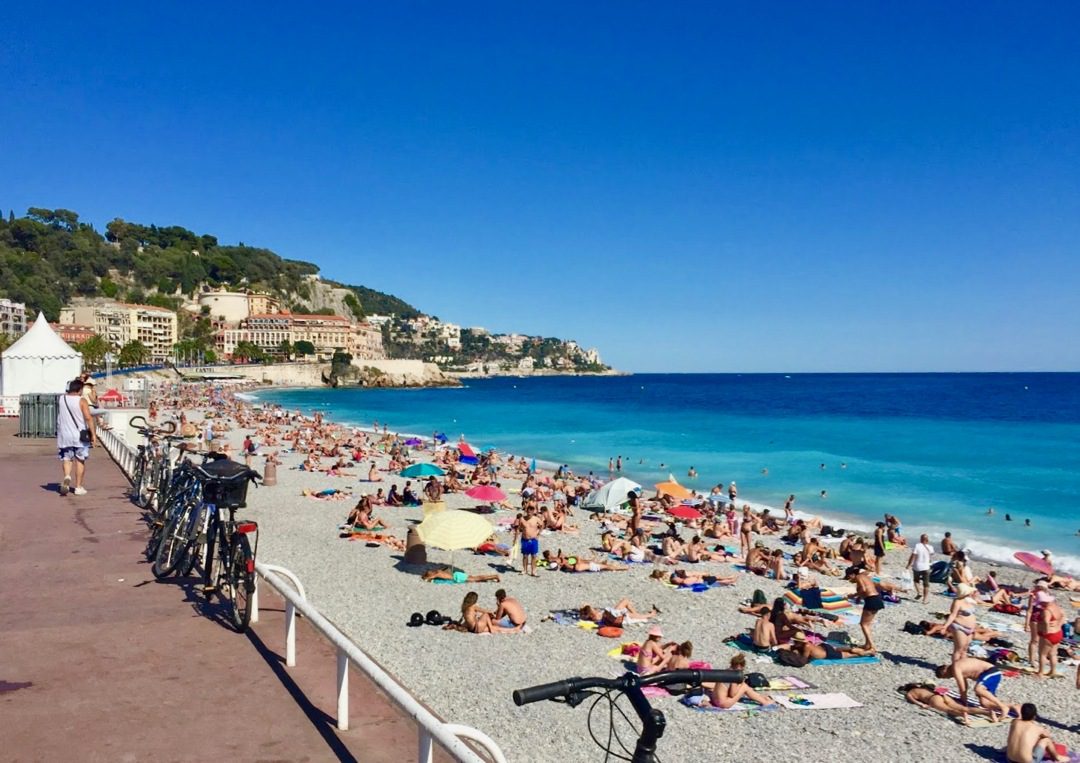 The beach on the Mediterranean Sea near the Promenade des Anglais in Nice, France.

TT: So true! What advice do you have for teachers who are dreaming of travel?

S: Get involved in National History Day and other programs that seek to bring history alive with hands-on experiences and travel.

TT: Thanks so much, Shane! Readers, what questions or comments do you have? 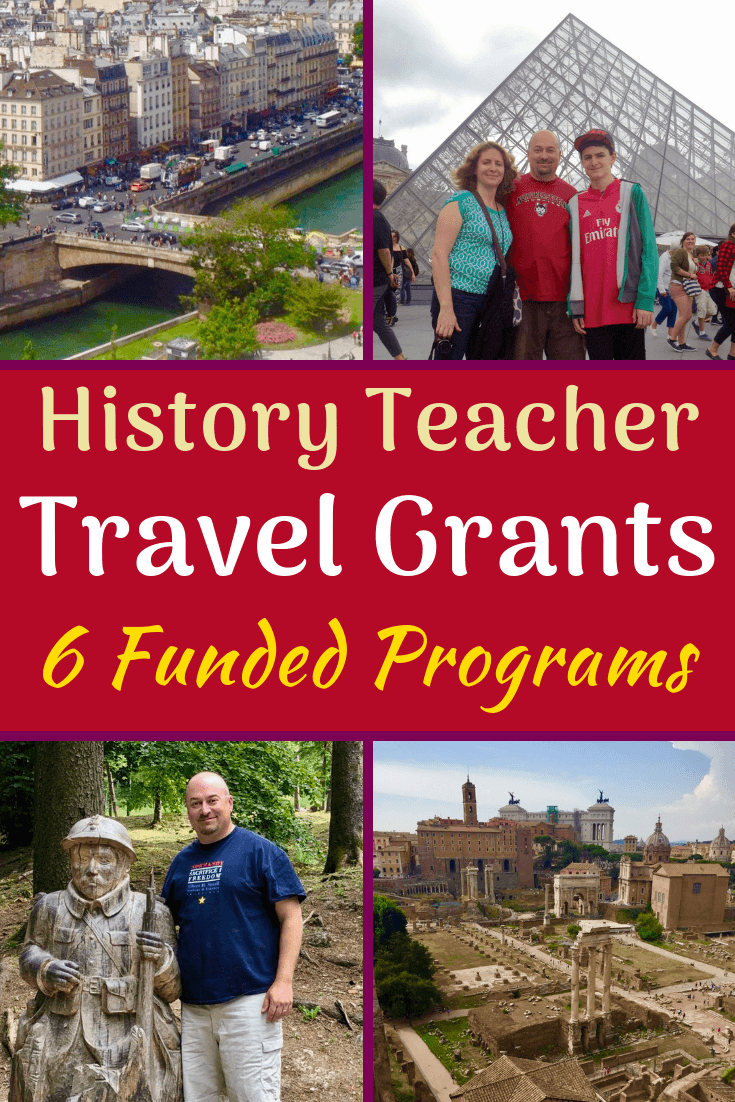 Such a great list of resources! I've done an NEH summer program myself (in the MS Delta, which was incredible), and I've also shared a few of these links with colleagues and students.

Your interview will help so many people, Shane! Thanks for taking the time to do it!

Thanks for interviewing me! I love sharing these experiences and learning about those of others!