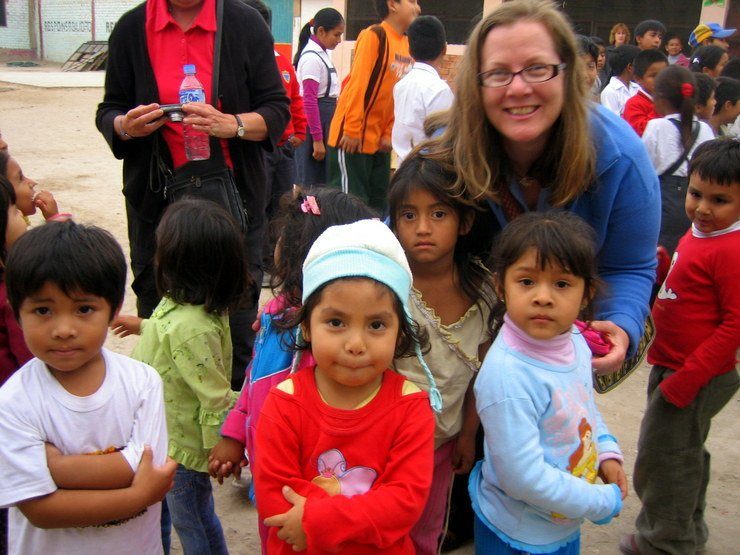 Libby on some of her world travels, with students in Lima, Peru.

Teaching Traveling: Over 3,300 people have already read the article about how teacher Libby Lupfer traveled the world through teacher grants and programs, and now Libby is back by popular demand!

This time, we used a different interview method.

Libby: For this interview about my teaching and overseas travel, I decided to have my students ask me the questions. The following questions were written by my students in World History and European History classes in September of 2012. I was impressed by their thoughtful questions. I was also surprised by what they were interested in, things that I had not considered.

It was helpful for me to know from my students what they are interested in learning when their teachers travel internationally. Hope the following student questions and my teacher responses are helpful to you as you consider and/or continue teaching and traveling. 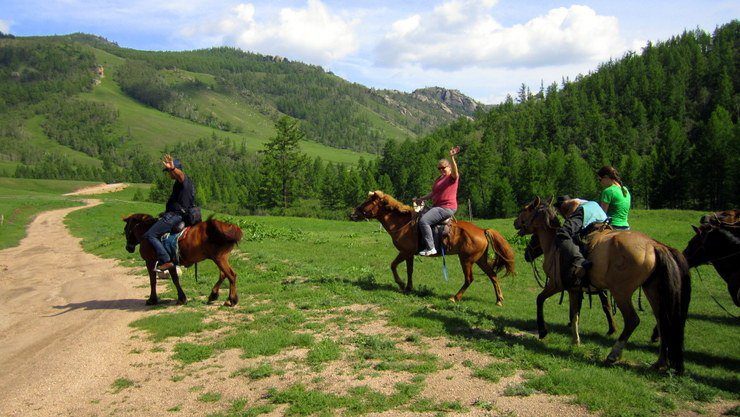 GEEO teachers on horseback in Mongolia!

Students: How have your travels affected the way you teach History?

Libby: I think that overall, traveling helps me to both better understand history and to be more passionate about sharing it with my students. For example, all I had ever known about Incan History was from textbooks but when I went to Peru with GEEO (Global Exploration for Educators Organization), I realized that some of the history that I was teaching was inaccurate.

The Inca were able to use mortar in their buildings but choose not to in their most important temples in order to honor their gods with the difficulty of building in this manner.

I also learned that the Inca were masters at agriculture. They did numerous horticulture experiments and their terraced fields still work today, complete with irrigation systems. Finally, I learned that the Spanish didn’t really conquer the Inca. The people of Peru have lived on their own terms even as a colony of Spain. The Incan culture was rich and they often incorporated European culture into their own, such as the Cusco school of painting.

When I went to Tunisia with GEEO and visited the ruins of Carthage, I realized that the history textbooks were wrong is saying that the Romans destroyed it so much that nothing existed there again. Carthage was such a good location that the Romans built on top of it. Of course, the list of how traveling has affected the way I teach history goes on and on. 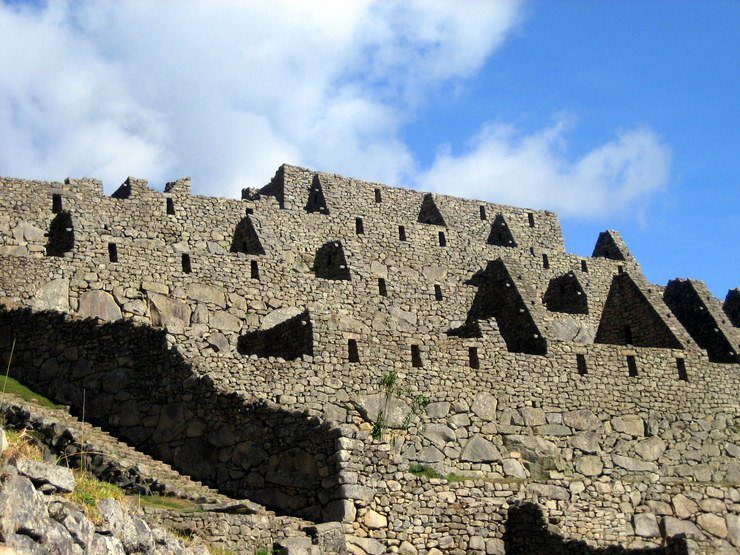 S: How has traveling changed your perspective on life and the world?

L: I think that the biggest thing that traveling has changed about my perspective on the world is that the world is not a scary, dangerous place. People are people and that connection can be made anywhere. I have learned to expand my view of the world and myself. And I have gained much more from the people that I have met than I have given them.

A few years ago, I went on a volunteer trip to Haiti and I learned from Haitians the lesson of gratitude. So often, where I live, people can focus on what they don’t have and how their lives don’t go the way that they want… and the Haitians that I met were more aware of the blessings that they did have, not what they didn’t. 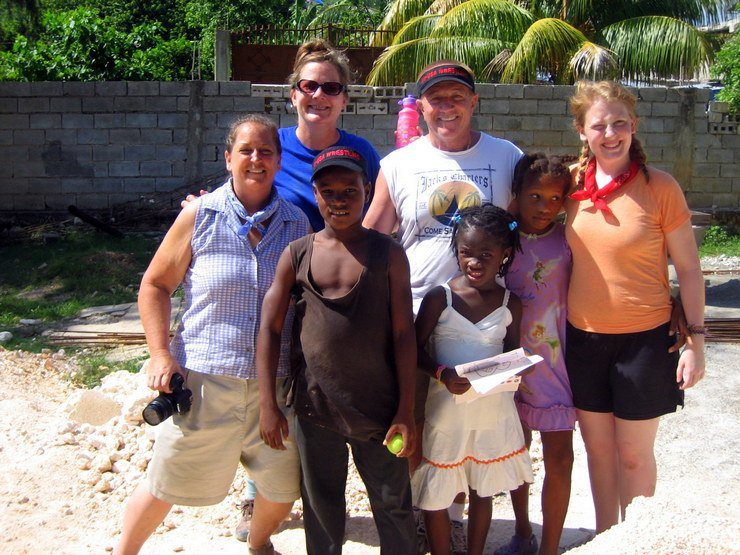 Learning the value of gratitude during travel in Haiti.

S: How does your history teaching influence your choices of places to travel to?

L: Teaching History has influenced me to go to places that I teach about so I can better understand their history and thus help my students better understand it. However, I have to confess that I also go to where I want to go. I guess that I love learning just for my own life besides teaching.

S: Have you ever revisited the same country and if you did, was it the same experience?

L: Yes, I have. There are several countries that I have visited multiple times. (Japan, France, UK, etc.) No, the trips are always different.

S: What is the greatest difference you saw over a period of time with the same country? 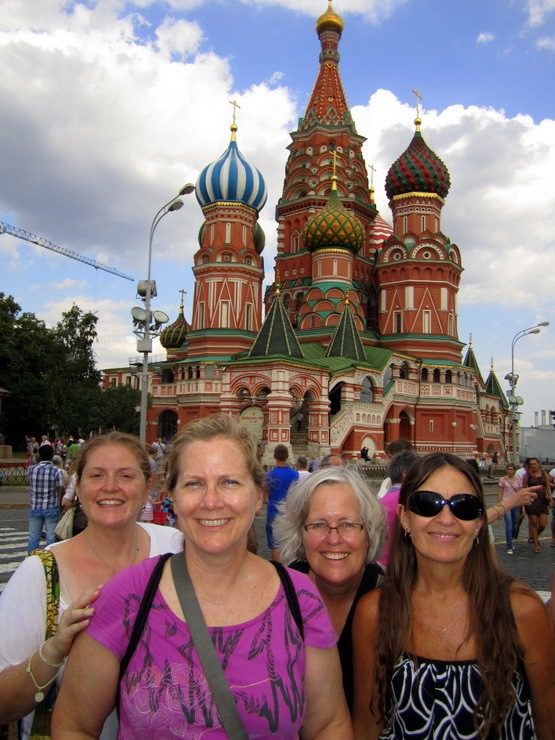 L: This past summer I took a train trip from St. Petersburg, Russia to Beijing, China with GEEO. I had been to both Russia and China before, in 1982 and 1999 respectively. I was particularly excited to go back to Russia since it was a Communist nation under Brezhnev and had experienced the most change.

I was expecting a lot of change in Russia but I was also surprised at the amount of change that I saw in China over just ten years. Both nations and peoples are better off than when I visited them last. I was particularly struck by the amount of young Russians getting married.

A sign of hope and optimism for the future. I also was amazed at how much building had happened in Beijing. Both nations were much more positive about their lives than many of us in the States were last summer.

S: Have you ever been afraid to travel to a certain place?

L: Of course. The first time that I went to South Africa since so many people said negative things that I became concerned. However, I realized that they had not actually been there and were just repeating what they had heard on the news, so I chose to listen to what people who had actually been to African nations.

They all said that going to an African nation, I should prepare myself for a big welcoming spirit. And they were absolutely right. I have probably grown more as a person from my trips to Africa than any other continent. 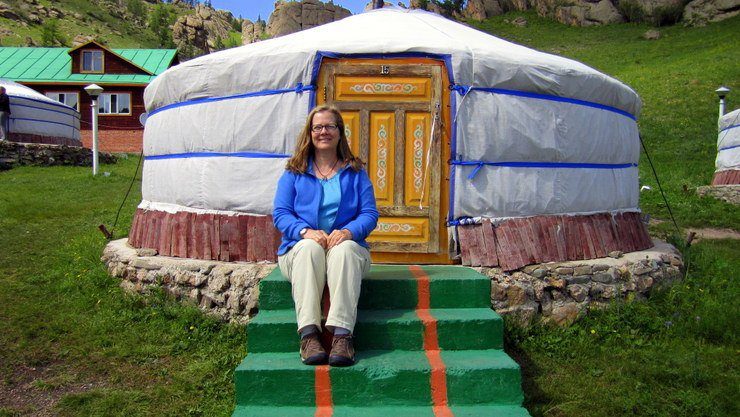 Libby at a ger camp in Mongolia. Love that architecture!

S: What is the most exotic food you’ve tried during traveling?

L: For some reason, many of my students want to know about the exotic foods that I have eaten on my trips. I never thought that they would find this so interesting but here goes: deep fried scorpions in China (like overcooked French fries and wood), camel meat in Egypt (like beef), jellyfish in Japan (like chewing rubber bands), Durian fruit in Malaysia (smelly, smelly but not much taste). And the BEST food that I have ever eaten? Alfajor cookies with coffee in Argentina and Uruguay! 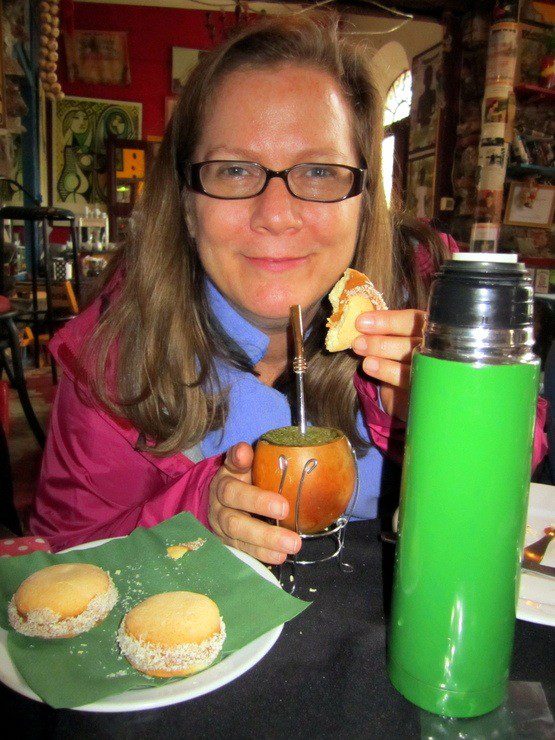 S: Where do you want to travel next?

S: Where were the most entertaining people you met?

L: The Vietnamese, hands down. Very, very funny and lots of fun.

S: What was the biggest culture shock you experienced?

L: It was my first time out of the U.S. in the UK. My accent really stood out and I wasn’t used to be identified for my nationality so often.

S: How do you deal with culture shock?

L: I get to a country early before traveling and spend a day at the hotel, sleeping and watching local T.V. and then venture out to a local café to write in my journal. Then I am ready to become a part of things and interact.

S: Have you experienced any dangers in developing countries?

L: I was a little scared when we were visiting a township in South Africa and people started yelling at us to get out. But then other people came to our defense, spoke up and told those people to leave us alone. Those kind people also started walking with us and around us so I felt really cared for.

I was also a little nervous at seeing all the guards with shotguns in front of businesses in different Central American nations. But again, I felt that most of the locals looked out for us. 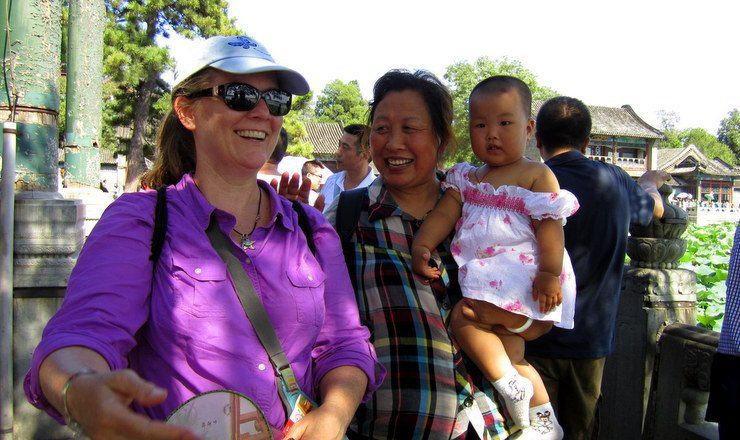 S: What is the longest plane ride you’ve ever been on?

L: 14 and ? hours from New York to Johannesburg, South Africa. Fortunately I slept for 8 hours of it. This is the only flight that I have slept so much on. I think that happened because the people on the flight settled down and all slept (no lights on, no talking, no one getting up, and everyone shared blankets and pillows). It was like one big slumber party.

S: Did you have any problems with the languages and how did you handle it?

L: Not much. I am lucky because of course I speak English and many people in the world use this as their international language. I also speak French, which does help out. The only place that I have had problems is Central and South America because they expect Americans to speak Spanish but I travel to those countries with American friends who do speak Spanish.

I do suggest learning to say “Hello”, “Please”, and “Thank you” in the local language. It helps make connections. Also remember that Toilet and Kaput are pretty international words. Finally, if I plan on using English, I always ask if they speak English before talking away. If they say no, I will find someone else who does. 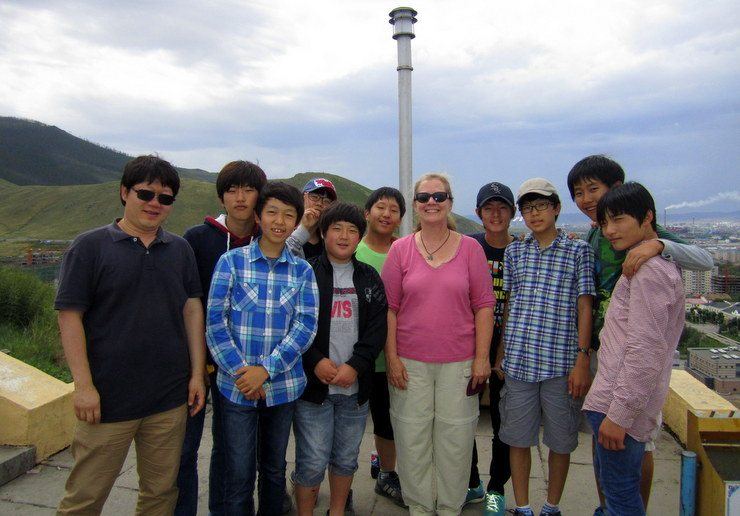 S: What is the best place you have traveled to?

L: I really love Japan, Peru, Vietnam, France, Ghana, and Mongolia. I would love to go back to each. 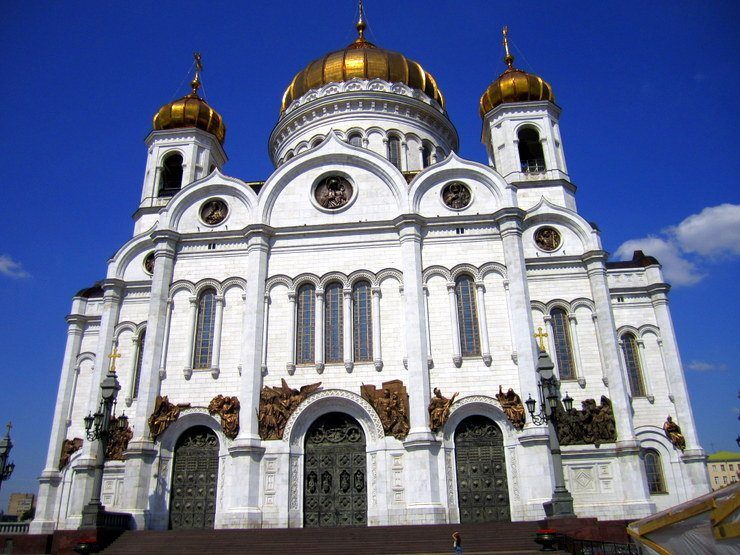 Cathedral of Christ the Savior in Moscow (recently rebuilt after Stalin tore it down to build a swimming pool).

S: What do you actually do on your trips: activities, adventures?

L: I try to visit museums to learn history and appreciate art (which I love). I also love to find great local cafes. I also try to find great restaurants and try to local food. I also try to get out into nature and hike. I love, love the beach and swimming the oceans and seas.

It seems that I have also ridden a lot of animals (not always much choice but the thing to do). I have ridden camels, an elephant, an ostrich, a donkey, and horses. Of course, I try to visit the homes of local people for at least a meal. Finally, I like to visit schools, especially history classes.

S: Have you made any friendships on your trips with people from those countries?

L: Yes, I have. I make better friends when I stay in a place longer, of course. That is why I recommend studying overseas during college like I did and/or volunteering overseas. Then you have time in a place and time to make good, lasting friends. 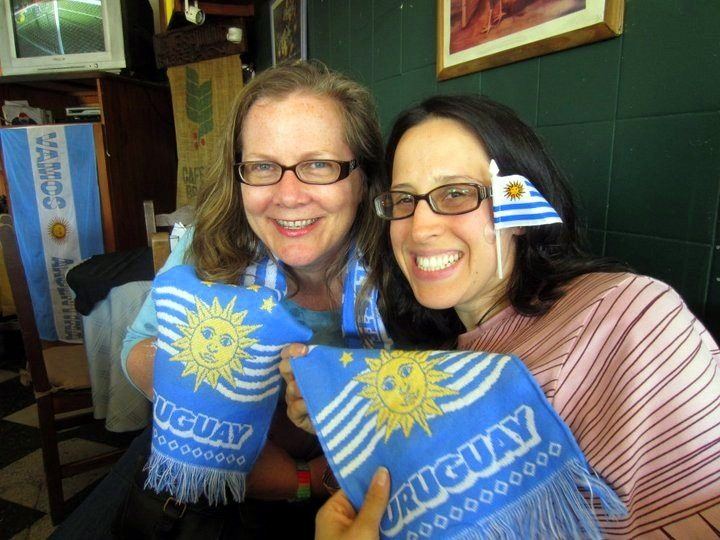 TT: Thanks so much, Libby and students! Readers, what questions or comments do you have?

Great interview! I had a chance to travel with Libby to Argentina, Uruguay and Brazil with GEEO and really enjoyed our time together. If anyone wants to learn more about GEEO please go to www.geeo.org. We still have room in most of our trips this summer. You can also call us at 1-877-600-0105.