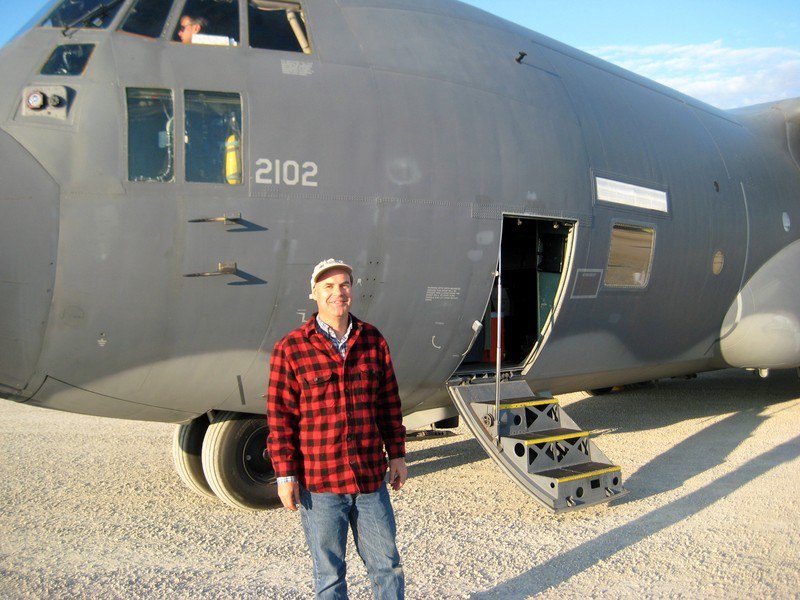 Wondering if it’s worth it to follow your passion projects? Read on!

Teaching Traveling: The interview “How to Become a Teacher Who Travels for Free” has become one of the most popular Teaching Traveling articles of all time, and I’m thrilled now to welcome back its author, Michael Wing, to give new insights on adventuring as a teacher!

Remind us about your background, Michael.

Michael: I teach ninth grade at Sir Francis Drake High School in San Anselmo, California. I’ve been lucky enough to do field work on five continents with outside organizations paying my way.

I publish in peer-reviewed journals, get grants from corporations and the National Geographic Society, and collaborate with NASA, the University of California and the National Park Service. My projects range from marine biology to high altitude gardening, to astrobiology, to archaeology.

Studying microbes in the Arctic soil.

TT: Love it! Now, you have a new book out called “Passion Projects for Smart People” which really encompasses the Teaching Traveling spirit.

What made you write this book?

(Note: All links to books here are affiliates which provide a small commission at no extra cost to you.)

M: For a long time I was too busy living the lifestyle I’ve described to think about writing a book. I was traveling to other countries on teacher study tours, doing research in California’s White Mountains, applying for grants, teaching full time, raising my kids… besides, I’d never written anything except a few academic papers in journals.

What inspired me to do it was that my sister-in-law wrote a book called City Goats. Goats are her hobby. So I thought maybe there would be a market for a book about the kinds of things teacher-travelers do. I had the idea while driving down Interstate-5 from Seattle to San Francisco. It’s a long straight freeway; easy driving.

I started to think of chapter topics. I had nothing to write with; I had to tear a page out of a hotel telephone book to make notes on. By the time I was in San Francisco I had an outline. Then I started to interview people who had done some really unusual, cool things. I wrote profiles of sixteen amazing people. 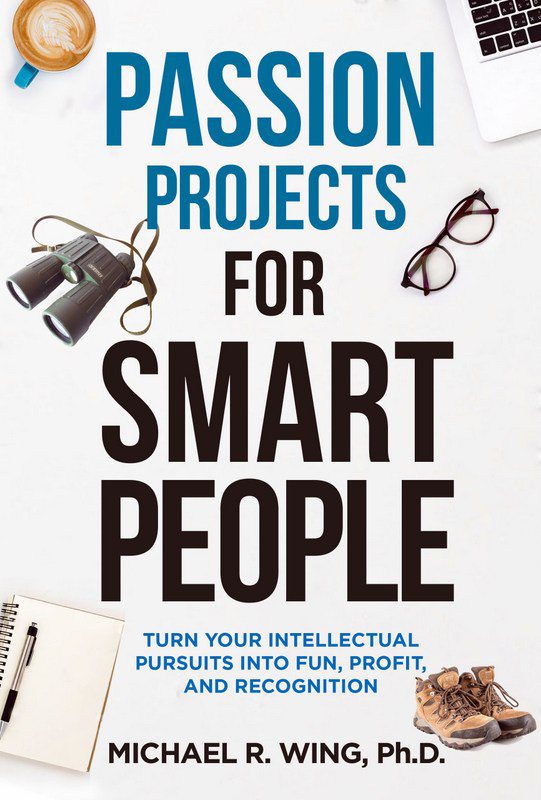 Now, let’s back up a little. You’re a ninth grade teacher at a public school. How did you come to start doing all this teacher travel in the first place?

M: A couple of lucky breaks got me started, but in hindsight I didn’t need them. The opportunities had been there all along. Most of these projects don’t cost much more than some gas money. I got a couple of grants for the expensive ones.

Ten years ago I went on a study tour called the Toyota International Teachers Program. They sent us to the Galapagos, all expenses paid! While I was there I visited a farm run by a guy who wanted to grow food locally.

I was already thinking about a different problem — a scientist named Pascal Lee had visited our school and he runs a research station on Devon Island, in Canada’s high arctic, because it’s a Mars Analog.

The geology and climate are like Mars. So, I was trying to think of a way I could get involved in Pascal’s research, but flying to Devon Island costs thousands of dollars and I couldn’t afford it.  Also, I had been hiking in California’s White Mountains and had seen the University of California’s research station at an elevation of 12,500 feet. 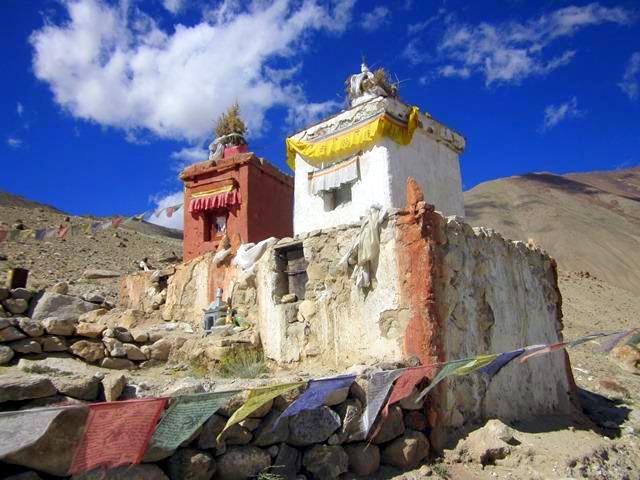 A Mountain Shrine in India.

Somehow these three things kind of merged in my brain during the trip. I said “we’ll grow food in the White Mountains. The climate is like Mars, and it’s a lot cheaper to get to than Devon Island.”

A few students and I put a miniature greenhouse up there and grew lettuce, radishes, potatoes, even winter wheat. For a few years it was the highest cultivated ground in North America. The project attracted media attention and got $20,000 in grants from corporations.

I heard about the PolarTREC program from a teacher in the Galapagos, and applied to that. By this time my mini-greenhouse project was up and running, so I had that to write about in my application. PolarTREC sent me to Finland on an archaeological expedition. 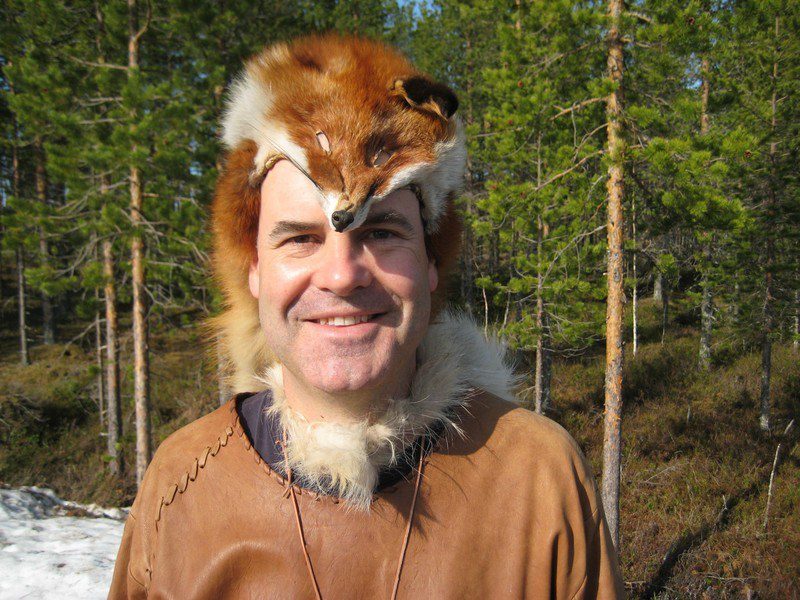 So when I returned home I knew enough about archeology to start studying a mysterious old line of granite bounders in my county that nobody understood the origin of. I and several of my students solved that one and published it in the journal California Archaeology. Plus, near our greenhouse in the White Mountains there are these groves of twisty trees called bristlecone pines.

We measured the twist on six hundred trees and also a bunch of environmental parameters and found no correlation between the twist and any environmental factor. We published that one in a peer-reviewed journal too. 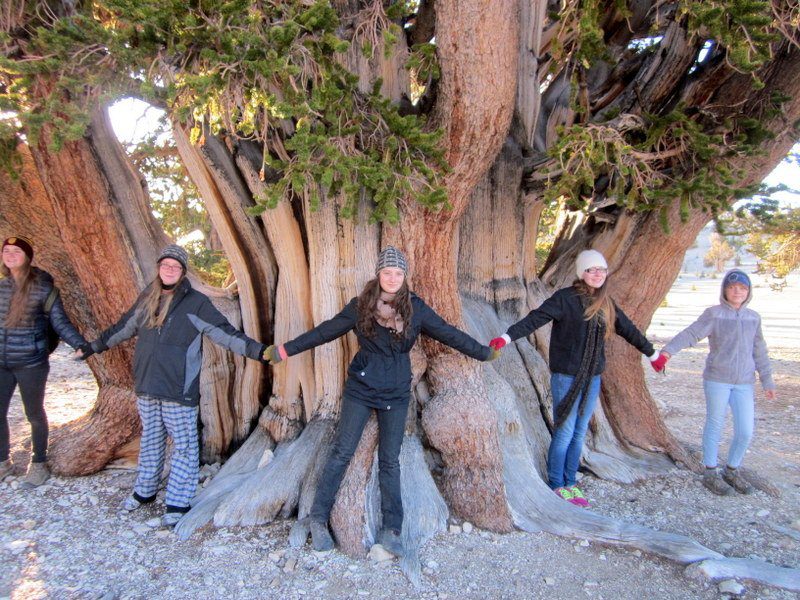 So one thing would lead to another.  I found out about the Spaceward Bound program when I paid a call on a NASA scientist, Chris McKay, to discuss my mini-greenhouse.

That resulted in me going on expeditions to the Mojave Desert, Namibia, the United Arab Emirates, and India with him and his colleagues. Now I have a project that involves deserts on all seven continents! But the budget for it is basically nonexistent. I rely on scientists who are going to these places anyway. 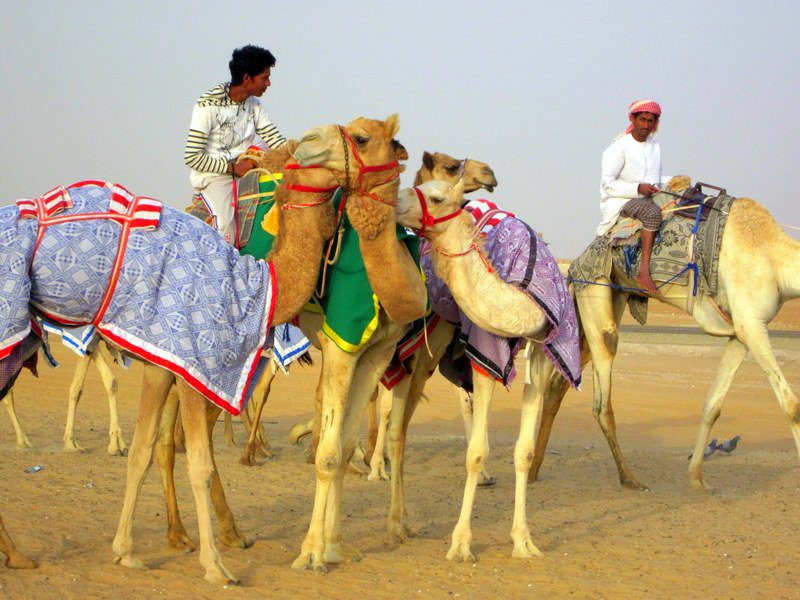 TT: What an incredible series of teacher travel opportunities! Talk more about the money piece, if you wouldn’t mind.

M: My family and I live on my teacher’s salary. If I thought I had to be rich to do these things, I would never have done them. None of the people I’ve profiled in my book are wealthy.

I pay out-of-pocket for some small expenses like tanks of gas, some field equipment; things like that. But I also get free trips to interesting places and I get paid extra by my school for supervising student science projects, and I got paid for writing this book.

My projects definitely pay for themselves in the long term. When I take students to the White Mountains, we get our meals and lodging from the University of California, and it only costs $50 per person per day. We can afford that. One of the times I went to the arctic, I flew for free on an Air National Guard training flight!

I would say that most of the people in this book earn extra income from their project expertise, or at least get their projects subsidized somehow. They teach classes, do consulting work, or sell books. 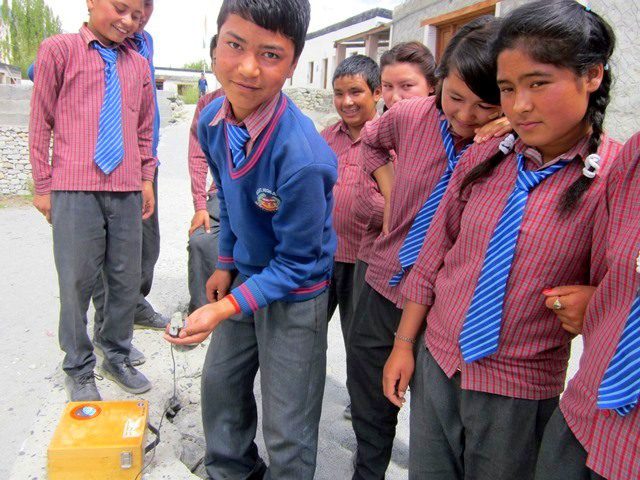 TT: It sounds like you have really leveraged your position as a teacher.

M: Teachers have access to a lot of resources. They are well-educated and intellectually curious. They have some free time, at least in the summers and on school breaks. They have students who will work for free, as long as the work is interesting and can help build a resume and skills.

They have access to school equipment. They get to apply for some travel opportunities and grants intended specifically for them. It’s probably easier for teachers to raise small amounts of money for projects and travel than it is for graduate students or professors, and they don’t need large amounts of money because they aren’t paying anyone’s salary.

Plus, people and institutions outside of schools like to say “yes” to teachers if they can. There’s a lot of goodwill from universities, government agencies, libraries, companies, parents and so on. 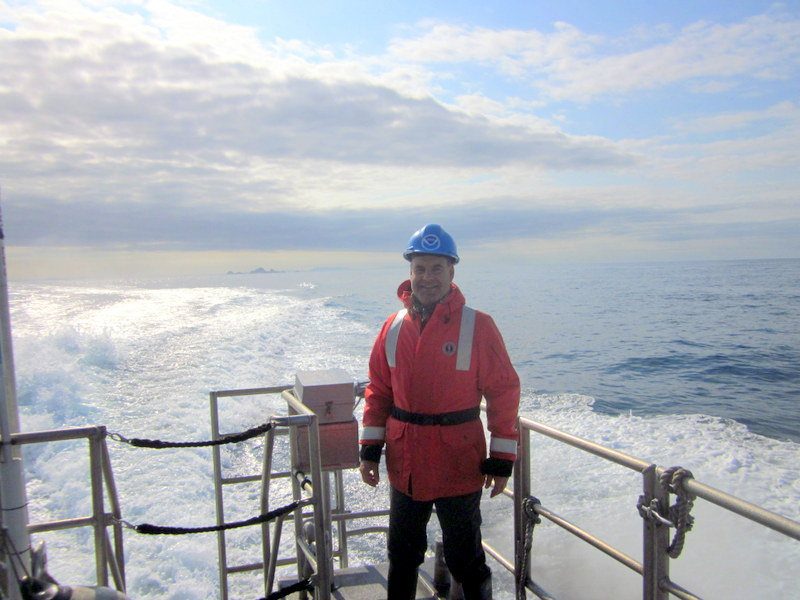 Michael during the Teacher at Sea program.

TT: But “free time?” Teachers? What is this “free time” you speak of? (I’m looking at pile of 140 essays right now that I need to grade by Friday…)

M: I don’t mean that teachers in their first or second year should try to do these things, or teachers with very young children at home. For my first eight years, I just taught my classes and went home.

But you get to a point where you feel you have mastered the classroom teaching part, at least well enough, and then the danger is that you might get stale or burnt out.

Projects and trips like this prevent that; they give you a reason to love the job and your students benefit from them too. Your own children get old enough to spare you for a few hours here and there, or you can involve them in your projects especially if the projects involve travel or the outdoors.

If you have to leave home for a few weeks every year or two, big deal. I only spend a few hours in an average week on these projects. Most of my time goes to my job and my family. 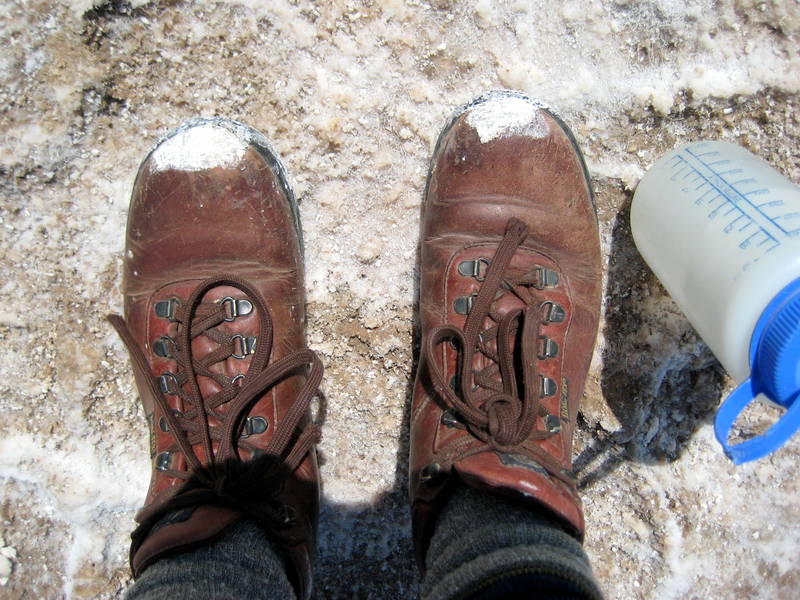 Salty boots during a trip!

TT: Such an inspiring and heartening way to put it. Thank you! So, what’s next for you?

M: I’m working on another book — this one for teenagers. After that, I hope I stop writing for a while. It’s addictive, but it’s so much work. Especially all the things you do after the manuscript is written. Writing’s the easy part.

I want to go to Antarctica – I have a vain ambition to travel to all seven continents on scientific expeditions and I haven’t been there yet. And up in the White Mountains there are all these old stone shepherd’s huts and windbreaks and hunting blinds that nobody has surveyed or studied yet – I’d like to spend a few summers just tramping around there discovering and studying them. That’s kind of simmering on the back burner of my mind. 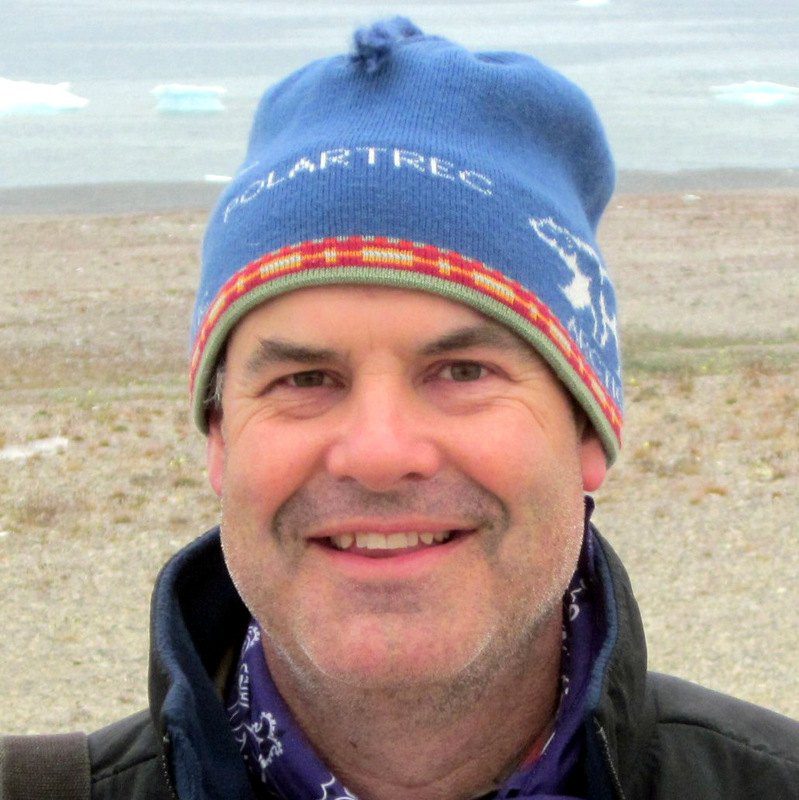 TT: Sending Antarctic vibes to you! So, how can somebody get your book?

M: Thanks for asking! It is on Amazon (click here for it) and Barnes & Noble, and in bookstores. I hope it’s helpful and inspiring for people!

TT: Thanks so much, Michael! Readers, what questions or comments do you have? 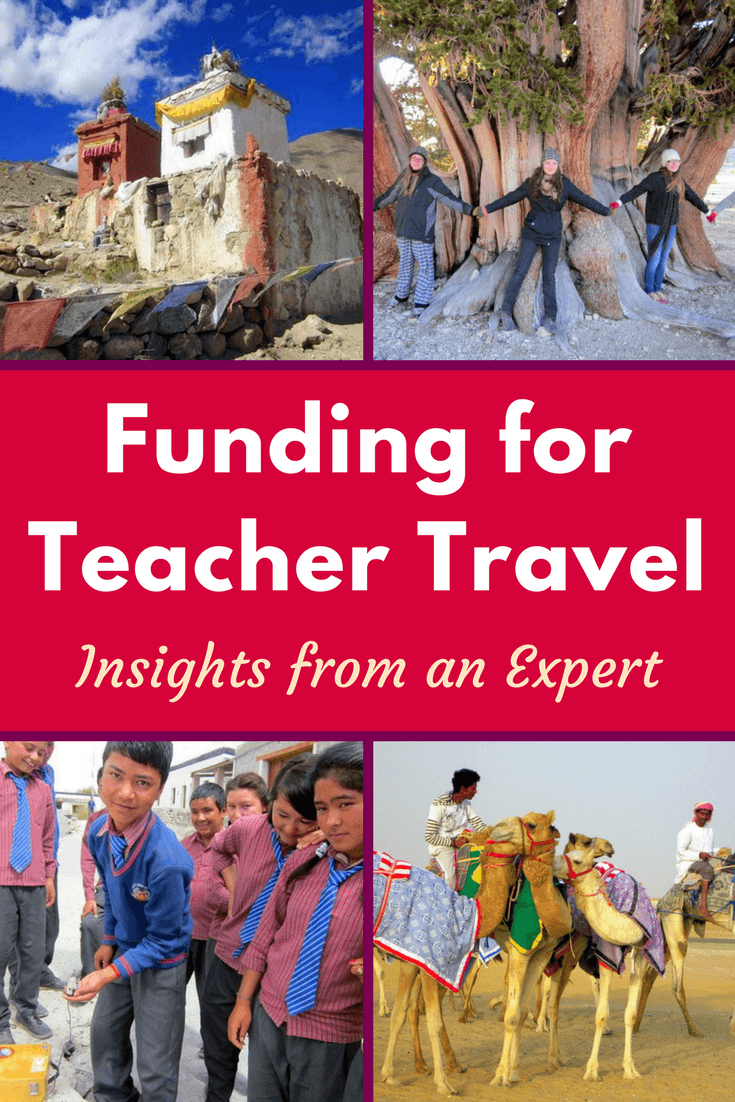 This is Michael Wing, the subject of the interview above. Lillie-thank you so much! Your site is the absolute best; I'm constantly learning new things from it. Readers - feel free to ask me any follow-up questions you have!