These drawings show how words can offend, even when not meant to.

In our increasingly interconnected world, ultimately every teacher — and person — needs skills to bring understanding and respectful norms to diverse groups. When interacting with people from different backgrounds, students and adults may not mean to be racist or offensive, but small word choices may inadvertently cause pain.

What follows are some accessible illustrations that you may use for lessons or personal reflection about intent versus impact.

What are microaggressions? They are the “little” everyday acts of discrimination and rudeness against people from marginalized groups. They are not always meant to be mean by the people saying them, but they do cause harm, especially because they add up over time.

Let us examine some examples in drawings I created which were inspired by the “Racial Microaggressions” photo project by Kiyun Kim, and commissioned by the Stanley H. King Counseling Institute for their summer workshops on supporting adolescents.

Above, we see an utterance which is often meant to be a compliment, but succeeds only in being mean: “You don’t act like a normal Black person.” Other variations include, “Wow! You speak like you’re White,” “You’re not like other [insert group here]!” and “I don’t think of you as [X group].”

Why is this offensive? It is effectively insulting a whole set of people by positioning whiteness (or another hegemonic group) as the norm, and the group of the “other” as lesser-than.

It also ends up implying the person being addressed is a sort of freak. This “compliment” is basically saying that the person is different from “their group,” and praiseworthy only because of similarity to the dominant group, yet not fully fitting in with that dominant group because it was noteworthy that the similarity existed in the first place.

This leaves the listener feeling isolated, insulted, and not seen as a whole and unique human. Bleh! Let’s not do that. Next…

Microaggression Example 2: “I assume you speak …”

Language is tightly intertwined with identity. By presuming to know what language someone speaks, we make unwanted and often incorrect assumptions about who they are and what their background is.

Thinking about your own life, the languages you do and don’t speak are probably full of stories which themselves can be bursting with emotions, choices, and history. No one can know those without thoughtful, respectful, and appropriate discussions and relationship building.

There are 4.5 BILLION people living in Asia right now, and that doesn’t even begin to count people of Asian descent living in other parts of the world.

Doesn’t it bother you when people assume something about you because of the town you’re from? Clumping Asia together is exponentially more bizarre, as the continent is over 17 million square miles large.

Many other microaggressions stem from over-clumping giant groups. For example, there are 1.6 BILLION Muslims in the world, and it is highly unlikely that any generalization could cover that many humans accurately! In short: careful with clumping.

Assuming a group of people have certain deficits or abilities (even if those abilities seem positive and are meant as a compliment) can be both hurtful and inaccurate.

It is not a compliment to say, “You are really good at math for a Latina!” because it implies the racist expectation that Latinas are bad at math, and also positions the listener as odd and isolated.

This piece also extends to hair. A classic microaggression is people reaching out and touching or squeezing the hair of someone from another group without permission, as if that group’s hair is magically up for (literal) grabs. It’s not!

Assuming one human can speak for their entire group (or groups, given that identity is intersectional) is futile, because humans are not the same, even if they share some characteristics!

Though we want all voices heard that want to speak, asking the one Black student in a class for “the Black opinion” of a Langston Hughes poem puts her on the spot in an inappropriate way.

Microaggression Example 6: “Get in a Box!”

We humans like things — and people — in neat boxes that we know the beginning and end of. Is that baby a boy or girl? What is your race? Which language do you speak? Unfortunately, for people who do not clearly fit in a visually evident category, there’s a constant question thrown their way: “What ARE you?” closely followed by, “Where are you REALLY from?”

First of all, this is exhausting for the person who constantly has to answer it. Second, it is hurtful because it implies that a person cannot interact in society without being put into a box — that merely being a human (full of LOTS of characteristics) is worthless without a racial or ethnic label! Let’s move away from that.

How to Respond to Microaggressions?

Now that we’ve established what microaggressions look like, the question becomes how to deal with them. Here are some options if you are on the receiving end:

1. Do and say nothing, and just stare. This can force the speaker to think again about what they’ve said, and why it might be offensive. Asking, “What did you say?” or “Can you repeat that?” can serve the same function, though has a 50% chance of not working if the speaker is not in a mindset to reflect.

2. Say something to more explicitly force the speaker to realize that they wouldn’t make that comment to someone who looked like them. For example, “That’s an odd thing to say,” or “That makes me feel kind of weird to hear you say that,” or, “What do you mean by that?” Some people choose to clearly explain why the utterance is problematic, which can be a helpful learning moment for the speaker, but does put extra labor on the person already being targeted.

3. Focus on the institution itself and go to the top. Rather than spending time educating a single person, some people choose to go to the head of the institution where the microaggression happened to request a systematic staff training and awareness-building action steps. There are a number of excellent organizations and materials out there for institutions to implement this, and if you know of specific ones, feel free to suggest them in the comments section.

4. A hilarious yet perfect video about how to thwart a certain microaggression is found in this short humor video, the “Where are You From Game.” Though the video is satirical, it actually is a tactic that could work, if the microaggressor catches on to how bizarre that question becomes when repeated!

Being a Bystander or Perpetrator

Now, if you witness microaggressions, do try to intervene so the target doesn’t need to, and/or try to address the issue with the speaker and the institution as well if it occurred within a larger structure.

Finally, we all mess up, so if you find a microaggression coming out of your own mouth, identify it, apologize, and continue research and learning about inclusiveness.

Hopefully this article and my cartoons have been helpful in summarizing the damage caused by common utterances, so that we all can work together to make a more welcoming, understanding, and well-informed world.

What would YOU add to this discussion about microaggressions? Do share!

Note: If you choose to share any images from this article, please clearly put a link back to this article for attribution. Thank you!

You can find more about my cartooning here, at my other website which focuses on art.

Want more lessons about living better and being a kinder, more effective person? Check out my compilation of 35 life lessons.

The author, Lillie Marshall, is a 6-foot-tall National Board Certified Teacher of English from Boston who has been a public school educator since 2003. She launched TeachingTraveling.com in 2010 to share expert global education resources, and over 1.6 million readers have visited over the past decade. Lillie also runs AroundTheWorld L.com Travel and Life Blog, and DrawingsOf.com for educational art. Do stay in touch via subscribing to her monthly newsletter, and following @WorldLillie on social media! 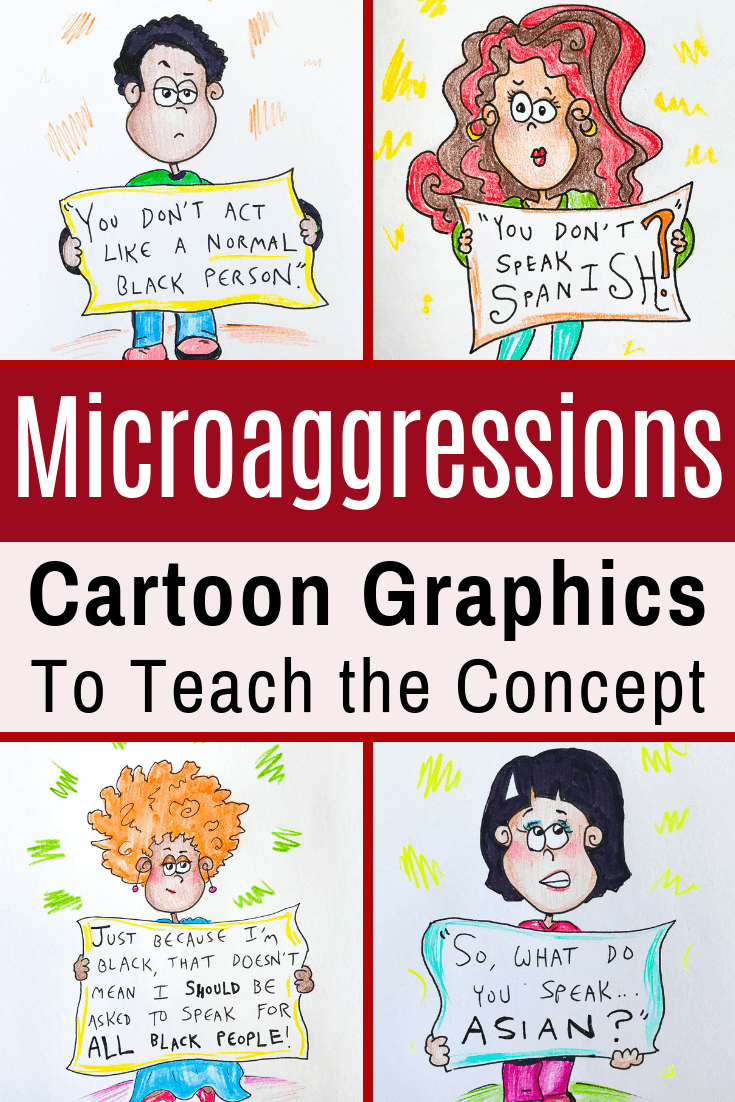 Lillie, thanks for raising awareness of this issue! I’d love to see a follow up piece where you interview people to get their advice on responses to microaggressions that are able to correct the person in some way (kindly/respectfully if it’s genuinely unintentional or a bit more “truth to power” where there’s a demonstration of more unpleasant power structures at play)...it shouldn’t have to be the job of the recipient of microaggressions to save the day, but storing up some example responses would be really helpful.

Context: I was on the receiving end of a “where are you REALLY from”-type exchange quite recently, and while I used to get that all.the.time, this was the first time in ages and it was a really annoying one from a stale pale male. I was dumbfounded and basically didn’t say anything and wish I’d had some stock replies in my back pocket to use. One that I read about subsequently was asking the person to repeat themselves to see if they figure it out on repetition that they are being insane.

Updated! Thanks so much, Rosy!

Such a great point! Thank you! I'll add in an "Action Steps" section once I finish grading final exams. In the meantime, anyone reading this can feel free to put ideas and thoughts if desired to be incorporated in that section.

Chinese people were known to be smart and intelligent people. In my old school, if you were Chinese, you had to be good at math and if you weren’t, you would be told that you weren’t “Chinese” enough. It made a lot of students feel pressured. Something else I’ve noticed at my current school is that people like to say “— is gay” or something similar to that, a lot. It’s supposed to be a “joke”. To me, it feels offensive because the phrase is used as a joke in a bad way.

(By the way, the drawings look really nice!)

Thank you for your thoughtful comment, Shuyi! In the future, I really urge you to let adults at your school know if someone is making an offensive comment. This can be done anonymously. It's the job of adults at a school to make sure everyone is being respected and feels safe!

Thank you for continuing this dialogue! This has happened to me, and continues to happen to me, in different environments. It’s definitely an issue that can not change if we don’t talk about it.

I’m always looking for ways to teach students how they can respect each other in very practical, everyday ways, and this will be a great resource for that. Thanks for writing this!

Thanks so much for your comment, Tobi! I invite you and any other teachers to use this article as needed for lessons (or one-on-one conversations), as long as the source is cited!

Thanks, Dan! It's the start of a whole new series of -- you guessed it -- educational comics, so let me know if you have any requests for topics to be covered! I have a bunch of my own that I'm planning, but am curious what others would find useful.

I think this is was a very informative article that not only teachers but students should look at.

Thanks, Nayanna! I'm hoping this gets shared in schools but also people thinking about the topic at home!