From TEFL Certification to Teaching in Eastern Europe

We hear so much about people who teach English in Asia, but what about ESL jobs in Eastern Europe?

Let’s listen to the story of Jenna Makowski, an American who completely changed her career path by getting TEFL certification and, after many frustrating applications, got a teaching job in… Russia!

Take it away, Jenna.

It was sometime around February of 2009 that I started to feel lost. Claustrophobic. Unhappy. Purpose-less. I’d started a Masters degree in the humanities two years before, with the intention of achieving the exact opposite: a life of guided contentedness and purposeful work in the academic realm.

But it wasn’t turning out that way, as I realized that my personality and perspectives just didn’t fit into an academic framework. At least, not at that point in my life.

Without a concrete path to follow and hazy goals, I decided to take advantage of being lost, and let myself wander. This wandering was more a state of mind, though, rather than a physical state. I’m not the sort of person who can just grab a backpack and hop onto a train. I do need direction, and a job.

So I decided to pursue both by getting a TEFL certificate, and to give myself space for the personal development that comes from wandering by searching for a job abroad. 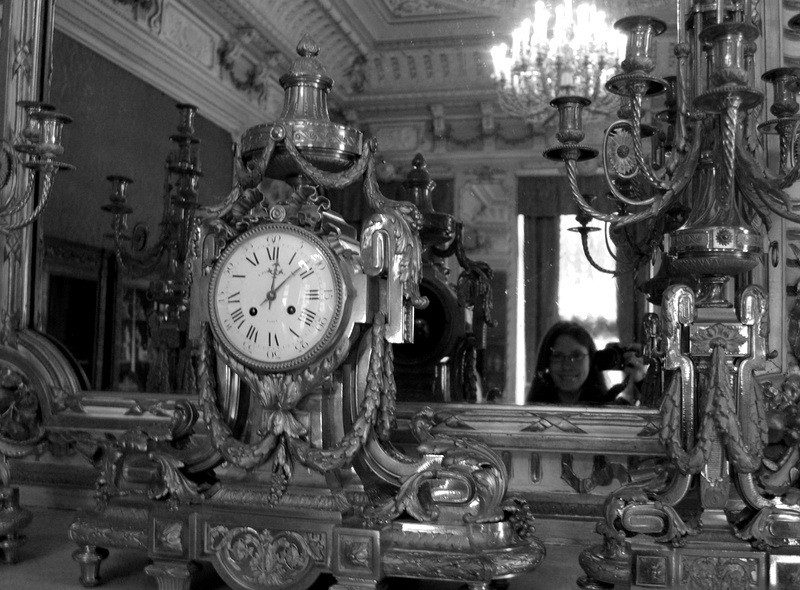 Jenna in a mirror in a St. Petersburg palace.

I completed a 4-week TEFL certification course in Chicago, and immediately knew that I would enjoy teaching English. I don’t think it’s possible to call something a passion after such a short period of time, but I could see myself heading down that track.

I completed my student teaching with a few different non-profit organizations in the Chicago area, working with people who have moved to the US from, literally, all over the world. It was an eye-opening experience, to realize how misunderstood and misrepresented such a large percentage of those living in America are.

And it’s a perspective that grows more and more necessary, as immigration legislation is continually ignored and funds for programs to help people transition are cut. Though I knew I wasn’t ready to pursue a teaching job in the States at that moment, I do feel confident that that’s what I’ll be doing in the future.

After completing my TEFL training, I began searching for a job. I was committed to the idea of teaching somewhere in Eastern Europe – Poland or Hungary or the Czech Republic. But frustration mounted daily as I sent out application after application, only to be turned down for not having an EU passport, or for not being in-country to do an interview. 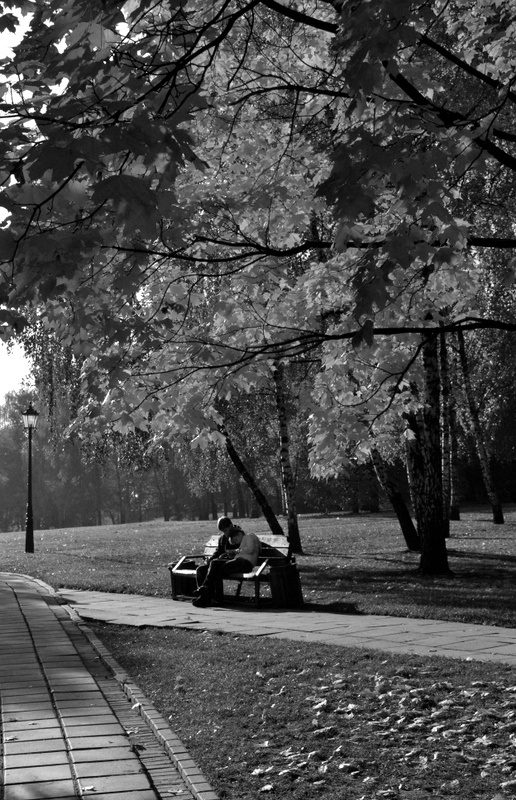 I was offered one part-time job that would never pay enough to live on. Though it’s not impossible to find a teaching job in Europe as an American, it can be difficult. Much more difficult than in South Korea or China.

As the days ticked down to September and the start of the new school year, my prospects looked grim. I began searching outside of my box. I ran across one website that had posted a notice about hiring teachers in Russia. I knew nothing about Russia.

I don’t know if I would necessarily recommend making such a life-changing decision about going to a country so different (and at times, unstable), in such a short amount of time. But then again, sometimes it’s time to take a risk. I was lucky. Or maybe it was more than luck.

A few hours and a few drinks later, I was beginning the visa application process. Though I don’t necessarily believe in fate, I do believe that the power of positive thought and an openness to possibilities can align with the powers that be. Whatever they are. A few weeks later, my plane was landing at the Moscow airport.

Already in those few weeks of preparation, I’d been introduced to the Russian system: minimal communication, ridiculous bureaucratic processes, and a frustrating lack of information. In the last email I’d gotten from my school, I was given one short instruction for my journey from Ohio to Moscow: “Meet Vladimir at the airport.” 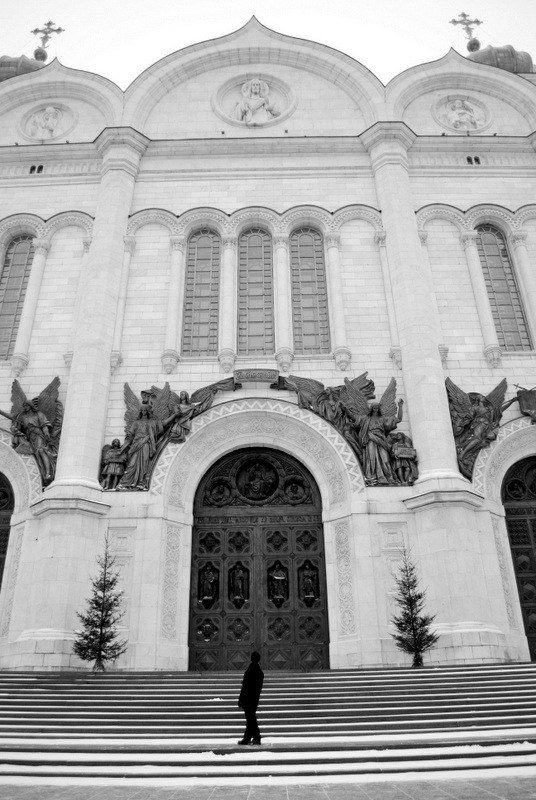 Feeling small by Russia’s Cathedral of Christ Our Savior.

I worked hard to quell my doubts. But Vladimir was there, holding a sign for me at the arrivals gate. I spoke very little Russian, and he spoke very little English. Which is why, after taking my bags and asking for my passport, I got a little nervous. But everything was fine. He just needed to make a copy for the immigration officials.

We tied my luggage to the top of his tiny car, and after an afternoon of driving through Moscow rush-hour traffic, hurried phone calls back and forth with my boss, and a few failed attempts at finding me a place to stay for the night, I finally ended up at the apartment where I’d be living for the duration of my contract.

According to my boss, that hadn’t been the original plan. But it all worked out in the end. Vladimir took me to McDonald’s for dinner that night.

Three days later, I began to teach… and to wander!

I completed my teaching contract in Moscow in June of 2010. I cried at the airport. I was ready to leave, and yet, I wanted to stay.

I managed to figure out the ropes of navigating job searches in Europe, and am currently living, working and wandering in Poland.

Thanks, Jenna! Readers, what comments or questions do you have? 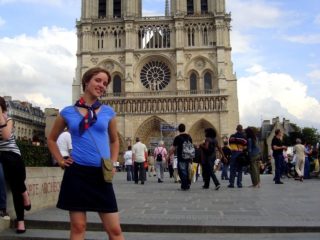 Hi Jenna. A different angle: I am a principal at a high school in California and will be retiring in a few years. We travel to Europe 2-3 times a year. Does my experience warrant any greater opportunity or am I just like everyone else and should promote myself no differently? Thanks!

Jenna, that was a very intriguing article on how countries like Russia often shun the 'TEFL limelight' ! Throughout my teaching English career I have always tried to avoid travelling to the more cliche TEFL destinations like China and Thailand despite the fact that Russia is always someway or another embroiled in some sort of scandal.

My first time in Moscow teaching I found both my fellow colleagues and pupils to be a little apprehensive/frosty towards me but my the end of the 6 month contact I felt very welcome!

I recently found a job contract for 6 months based in St. Petersberg using the tefl.org.uk website (http://www.tefl.org.uk/tefl-jobs/) and am looking forward to returning to Russia even though it will be during the winter months!! I hope more people look for other less popular places to teach because it can be so much more rewarding and feels much more like a real adventure.

Thanks for the article, David :)

Jenna, this was interesting and a lot like my experience teaching in the Republic of Georgia, which I sometimes write about at femmebionic.com. I quickly learned to just roll with the punches and accept that everything would work out in the end! It IS a fascinating place to teach, isn't it? Thanks for writing about this. I think people are often put off or are afraid of even visiting that part of the world and it's an area that shouldn't be missed.