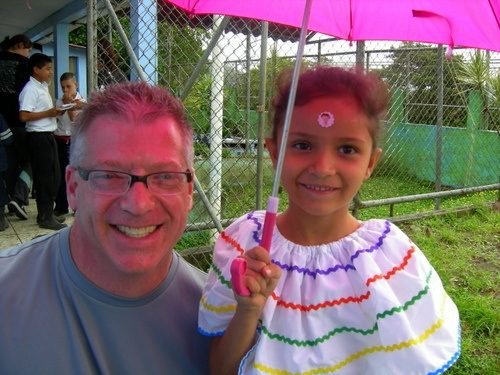 Scott with a young student during Costa Rica travel.

Teaching Traveling: There are some excellent programs to help teachers travel free with student groups. Florida teacher Scott Goldsher will tell us about one he used to travel with students to Costa Rica.

Scott, as background, how did you get into teaching in the first place?

S: I was born and raised in Baltimore where I attended undergraduate school at the University of Maryland in Baltimore County studying Pre-Med. From there I moved to Chicago where I completed my B.S. in Human Biology and my Doctorate of Chiropractic.

I returned to Baltimore where I practiced for 14 years until suffering a knee injury that led to my entering the field of education. I moved to Florida to be closer to my family and taught Anatomy & Physiology to Allied Health Professionals for a year until accepting a position in the Palm Beach County School District. 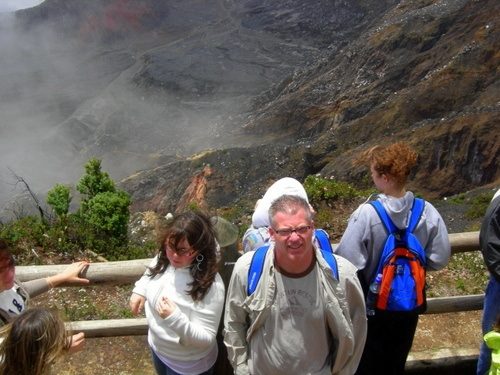 At the mouth of Arenal Volcano during group Costa Rica travel.

Starting as a middle school science teacher I had found my second calling.

After a year teaching science I was asked to start a Pre-Medical Sciences Academy at my school as well as revamp the current curriculum to bring the program to the middle school students.

After writing the proposal and being awarded the academy I was involved in designing the new room as well as raising all the funds to start the program.

I taught at the school for 6 years until I accepted a position teaching A&P at a Technical College in Oklahoma. Unfortunately about three months into my new job I suffered a heart attack at age 45 and returned to Florida to rehabilitate. 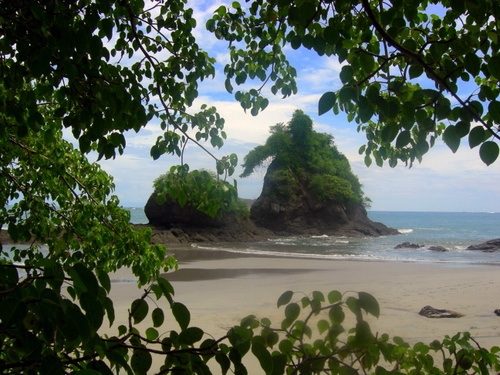 I am currently back with the Palm Beach County School District starting their first ever B. E. A. R. Academy (Biomedical Engineering Animation Robotics).

TT: What a story! How did you start traveling the world?

S: I began traveling after moving to Florida, spending 2 summers in Europe and visiting over 20 countries.

While my adventures were extensive, some of my most memorable were seeing the Eagles in Dublin, running with the bulls in Pamplona (scary), attending the World Cup in Germany, and visiting Auschwitz in Poland.

TT: Wow! So how did you transition from your own travels to group travels with students? 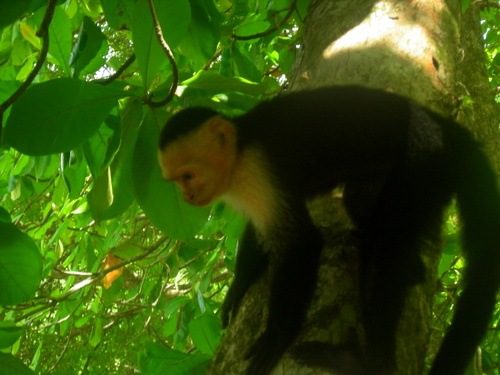 A Capuchin Monkey in Costa Rica (“My Name Is Not Marcel”).

S: Having got the travel bug, I wanted my students to experience other cultures and grow as individuals while having a great time in the process.

I contacted EF Tours after hearing about them from a colleague and traveled to Paris for a weekend seminar to learn about the program and the company.

TT: Nice! I also did an EF Teacher Training Tour, but mine was in Spain. It was great!

Did that experience influence your decision to travel with EF?

S: I was completely impressed with my EF experience in Paris, so I decided to head a trip to Costa Rica. There, the students could participate in such activities as Zip Lining, getting to hike and ride horseback in the rain forest, seeing amazing wildlife, staring into the face of an active Volcano, and bathing in the Hot Springs. 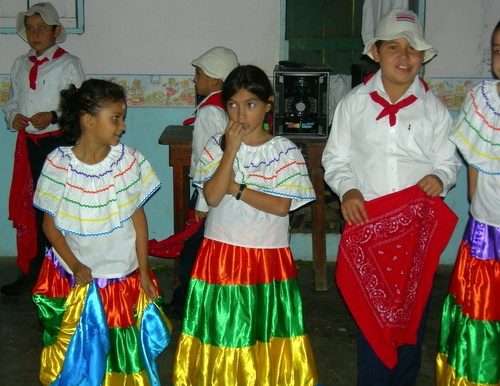 Students in Costa Rica getting ready to perform a traditional dance.

TT: What ended being the best part of your group student travel to Costa Rica?

S: The greatest experience though was our visit to a one room school in Monteverdi.

After several hours on the bus riding up the mountain on dirt roads and along cliff edges, we arrived at the school.

We were greeted by the local children who were dressed in their traditional clothing.

One by one as our students left the bus, they were escorted to the school by the kids.

Once inside, we were served freshly squeezed juice and a local pastry that the students had prepared. This was followed by a performance of traditional song and dance. 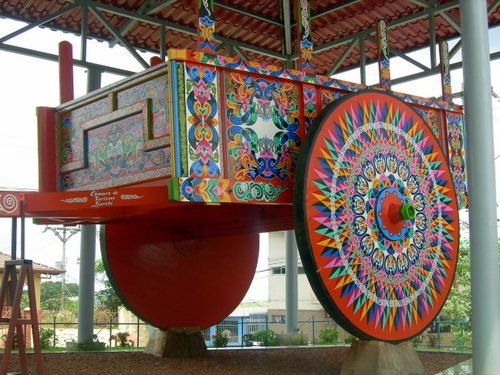 We then went to visit their school house where our students got to see what little their counterparts had to work with.

To say that this was eye opening is an understatement.

The school had one old computer and barely enough supplies to go around, yet the children could not have been happier.

The smiles on their faces as we gave them our contact information to stay in touch was priceless.

As we were driving away, our kids decided to collect supplies and send them to their new friends. I was perhaps as proud and touched by their gesture as I have been at any time during my short teaching career. 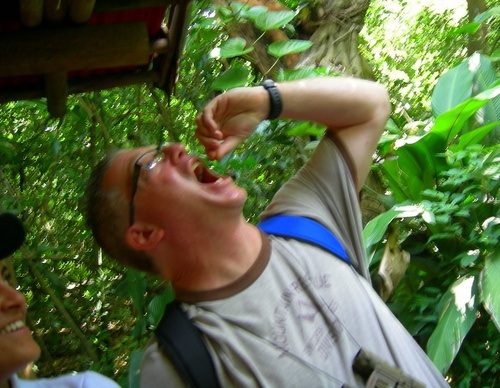 TT: What a powerful story!

How did your students pay for this life-changing Costa Rica trip?

S: In order to pay for their trip, the students organized several fund raisers both in and out of school.

They also wrote to family and friends to explain where they wanted to go and why.

All 10 of the students were able to raise enough money to go on the trip.

TT: When I led a student trip to China, I had a similar experience in that I was inspired with the passion with which all 42 Boston students raised money for the trip! 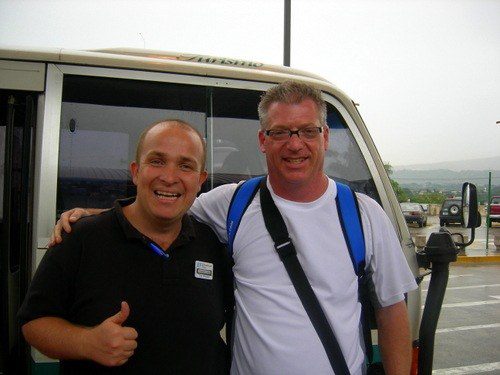 Scott with his “Awesome EF tour guide” for his Costa Rica travel.

So, Scott, what advice would you give to other teachers who dream of travel?

S: I would tell other teachers who are thinking about traveling with their students to investigate several companies (EF was great!) and decide where to travel before presenting it to the kids.

In order for the trip to go as smoothly as possible, you need to plan, plan, and plan again.

I would also like to say, don’t underestimate your students and the power of travel. It will be as eye-opening for you as it will be for them.

TT: Wonderful advice! Readers, what questions or comments do you have for Scott?