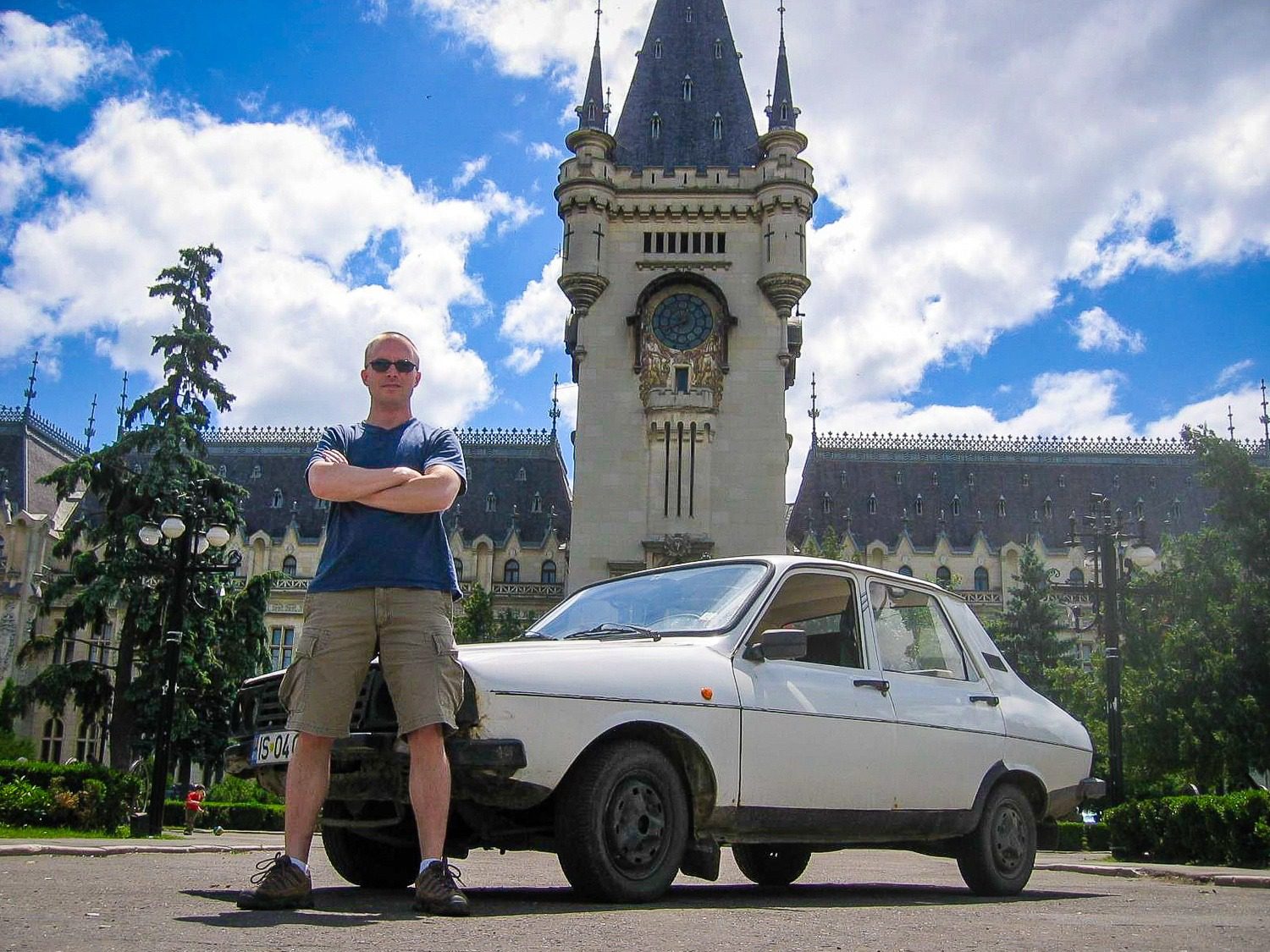 Leif, tracking down Dracula in Romania in an awesome car.

Teaching Traveling: Ever wondered the real history behind Dracula, vampire of Transylvania, Romania? Famed travel writer, Leif Pettersen (pronounced “Life”) gives us the scoop behind his new book on the topic. Leif, tell us a bit about your background.

Leif: I was born, raised and still live in Minneapolis, Minnesota, one of my favorite places on Earth. I was one of those classic drop-everything-and-travel stories you read about once a month on the BBC.

In 2003, after nine years working at the Federal Reserve Bank of Minneapolis, I quit my job, sold everything I owned and flew to Europe with two bags for what turned into 4.5 years of nomadic living. 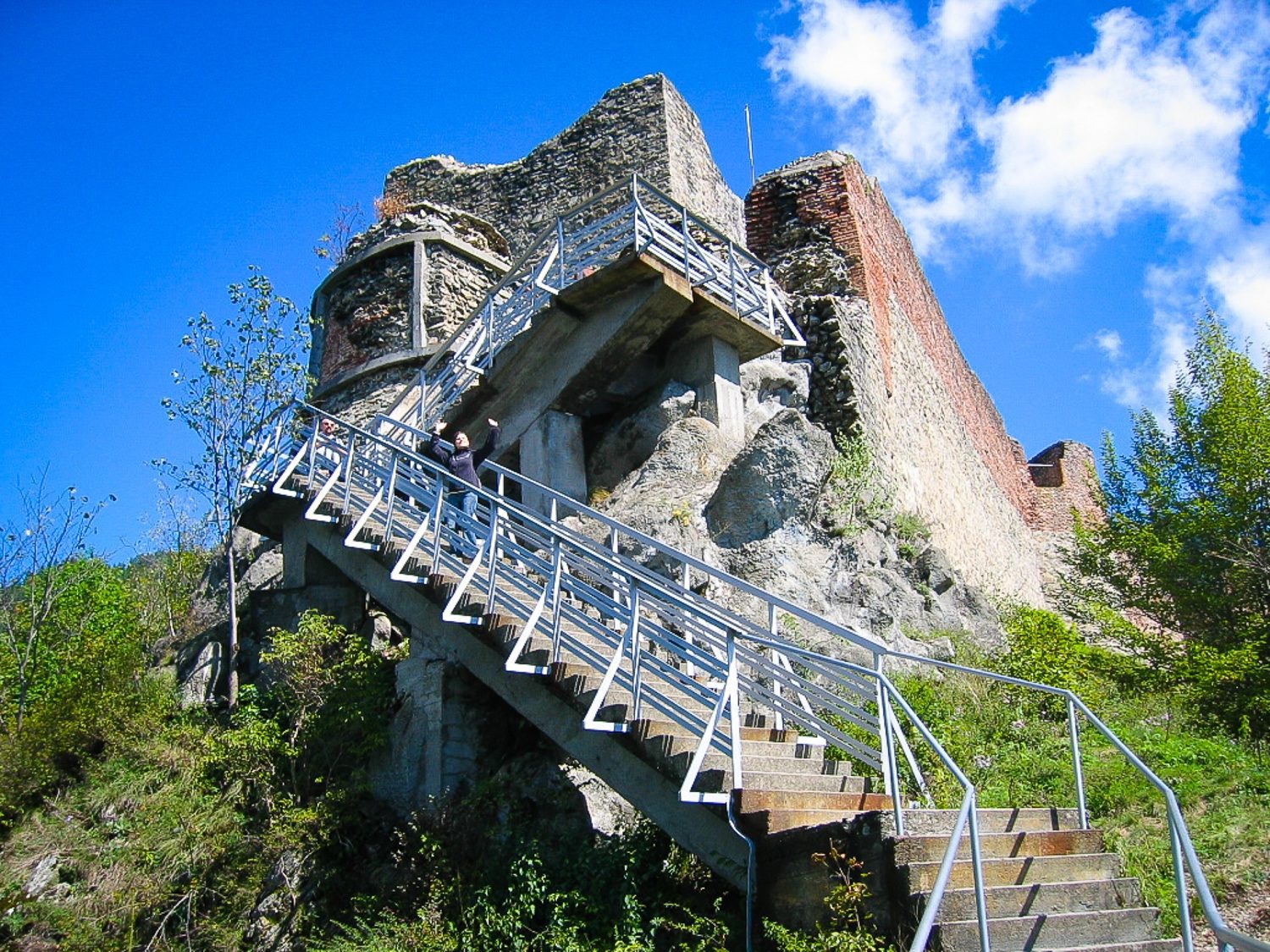 Though I had no experience, no connections, and no resources (remember, it was 2003 — Google didn’t yet have 70 million search results for “how to be a travel writer”), I managed to engineer a career in travel writing while I was on this odyssey that ultimately lasted for 12 years.

When some of my best clients started disappearing a few years after the economic crisis, I started job hunting and ended up as the Tourism Communications Manager for Mall of America, the largest retail and entertainment complex in the Western Hemisphere, with over 40 million visitors annually. 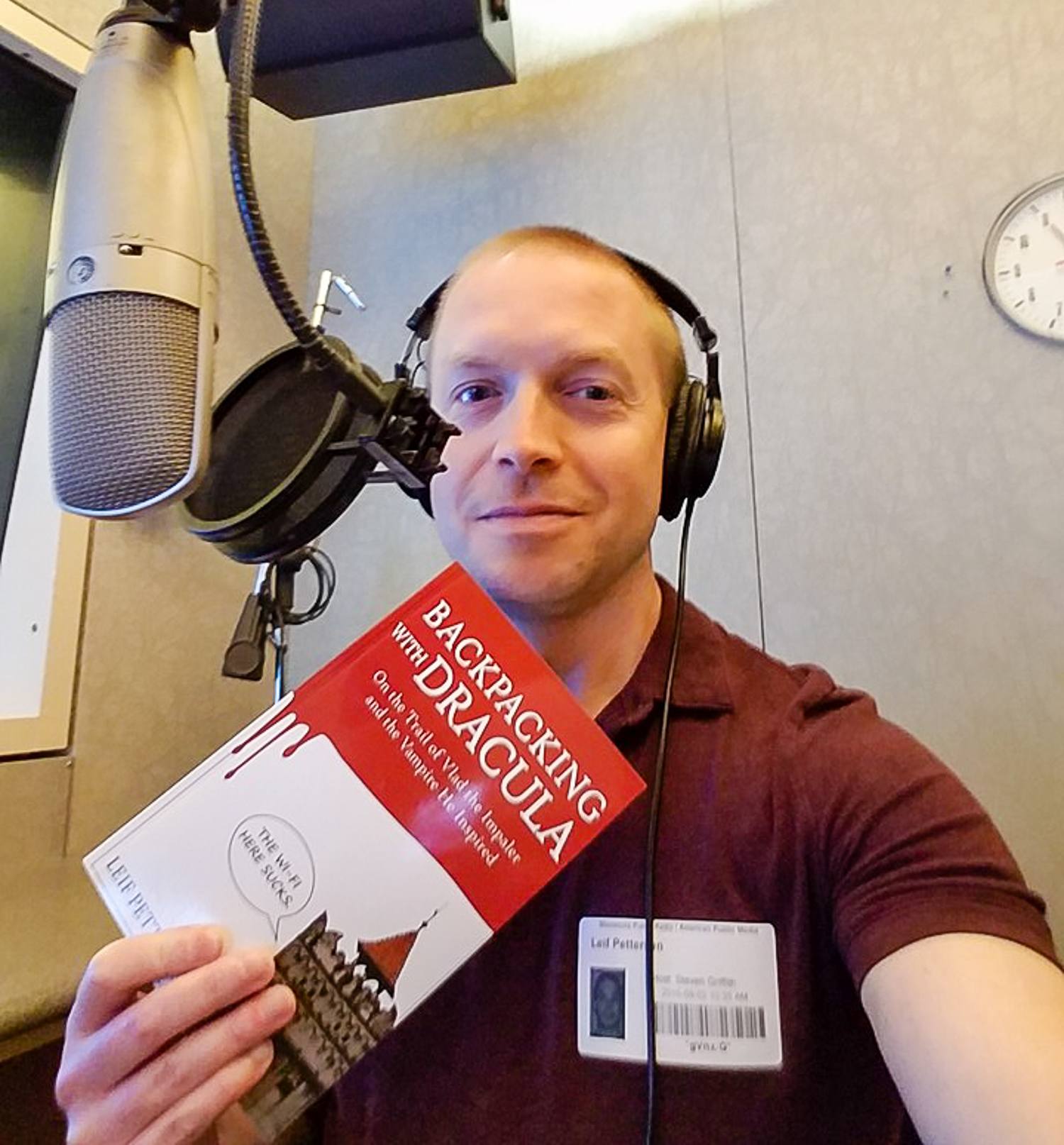 On a radio interview with Rick Steves about “Backpacking With Dracula.”

During my time at the Mall, I somehow found time on nights and weekends to complete my first book-length project, “Backpacking with Dracula: On the Trail of Vlad ‘The Impaler’ and the Vampire He Inspired,” a history-heavy, travel and humor book focused on both Draculas (or Draculae) and their legacies in Romania.

[Note: The Amazon book links above are affiliates that provide a small commission upon purchase at no extra cost to you.] 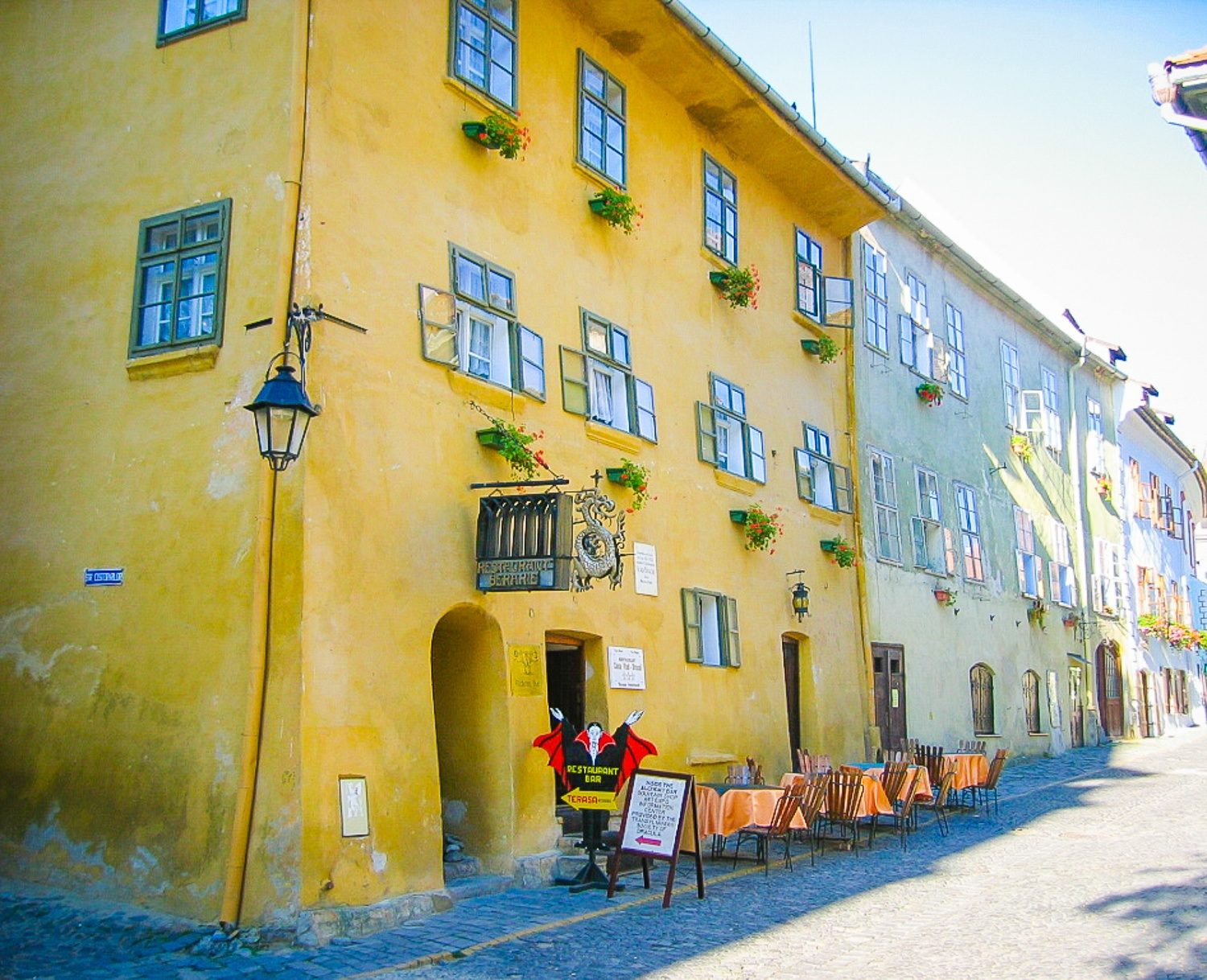 Dracula’s place of birth ad home until he was 3 in Sighisoara, now a restaurant.

TT: Go, Dracula, go! Now, tell us more about how your travels led you to the blood-sucker.

L: During my 4.5 years as a rising travel writer and nomad, I visited more than 40 countries in Europe and Asia, while taking breaks to live in Spain, Italy and Romania. While in Romania, I landed the contract to update Lonely Planet guidebooks for Romania and Moldova, a job that brought me to the region almost every year for seven straight years.

Naturally, it was during this time that I learned about the notorious, controversial Vlad the Impaler Dracula, 15th-century Prince of Wallachia, still considered a national hero, and the surprising number of surviving sites and ruins associated with him. 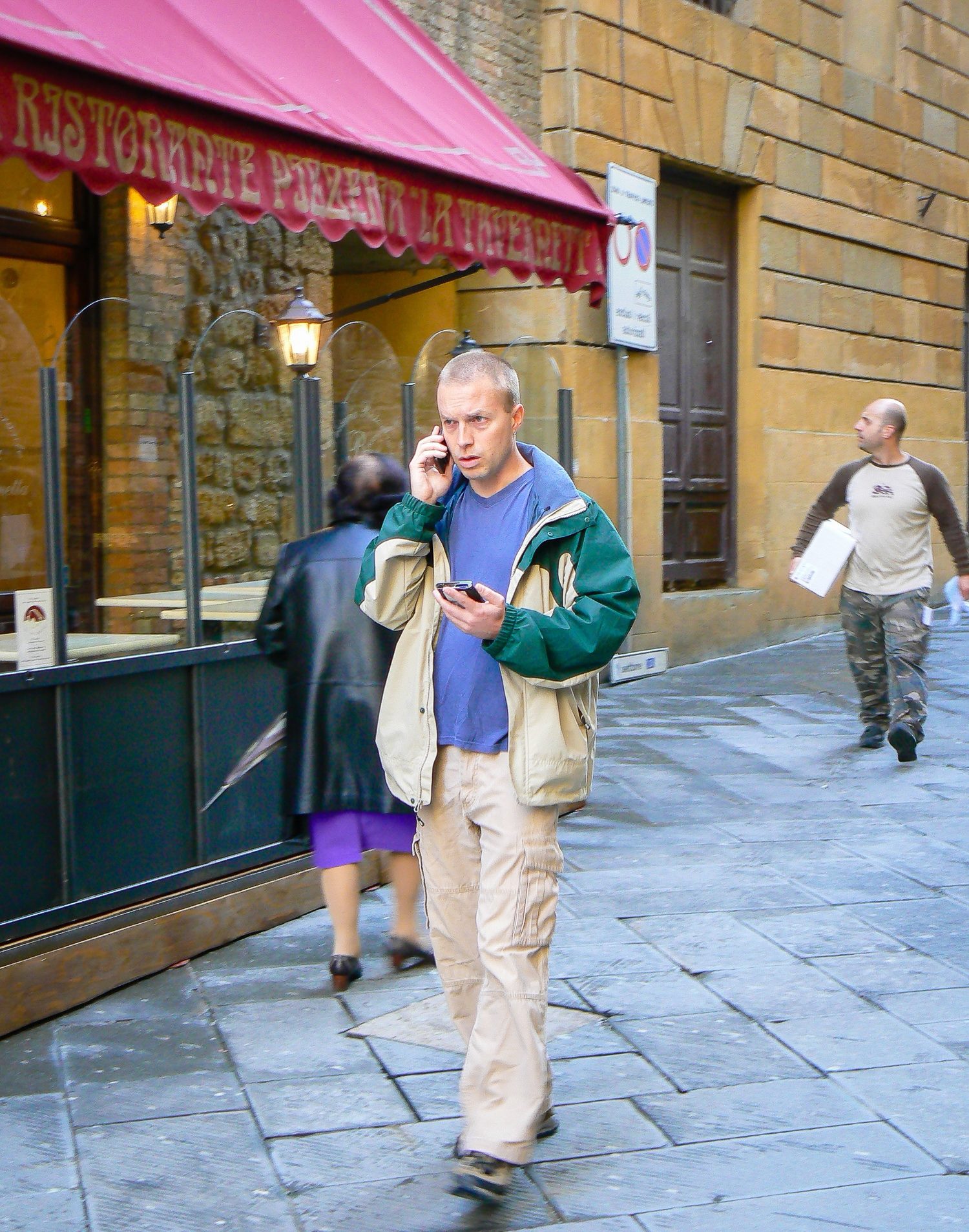 On a Lonely Planet research trip in Tuscany.

While I was working in Romania, mostly pre-European Union membership, the country was still referred to as “the Wild West of Eastern Europe” by Lonely Planet. It took me quite some time to adjust to living in a place where laws were more of a suggestion and virtually anything could be accomplished with a wad of cash, a bottle of vodka and a wink.

Romania was changing fast, in the hopes of entering the European Union in 2007, and being immersed in that frenetic transformation was breathtaking at times. It also made life more unpredictable, which is saying a lot in a country like Romania. The already daunting task of guidebook research was made significantly more taxing in a place where each day presented a new, unexpected obstacle or setback that sometimes required counterintuitive improvisation to overcome. I learned more about human behavior during those years than during the entirety of my life up to that point. 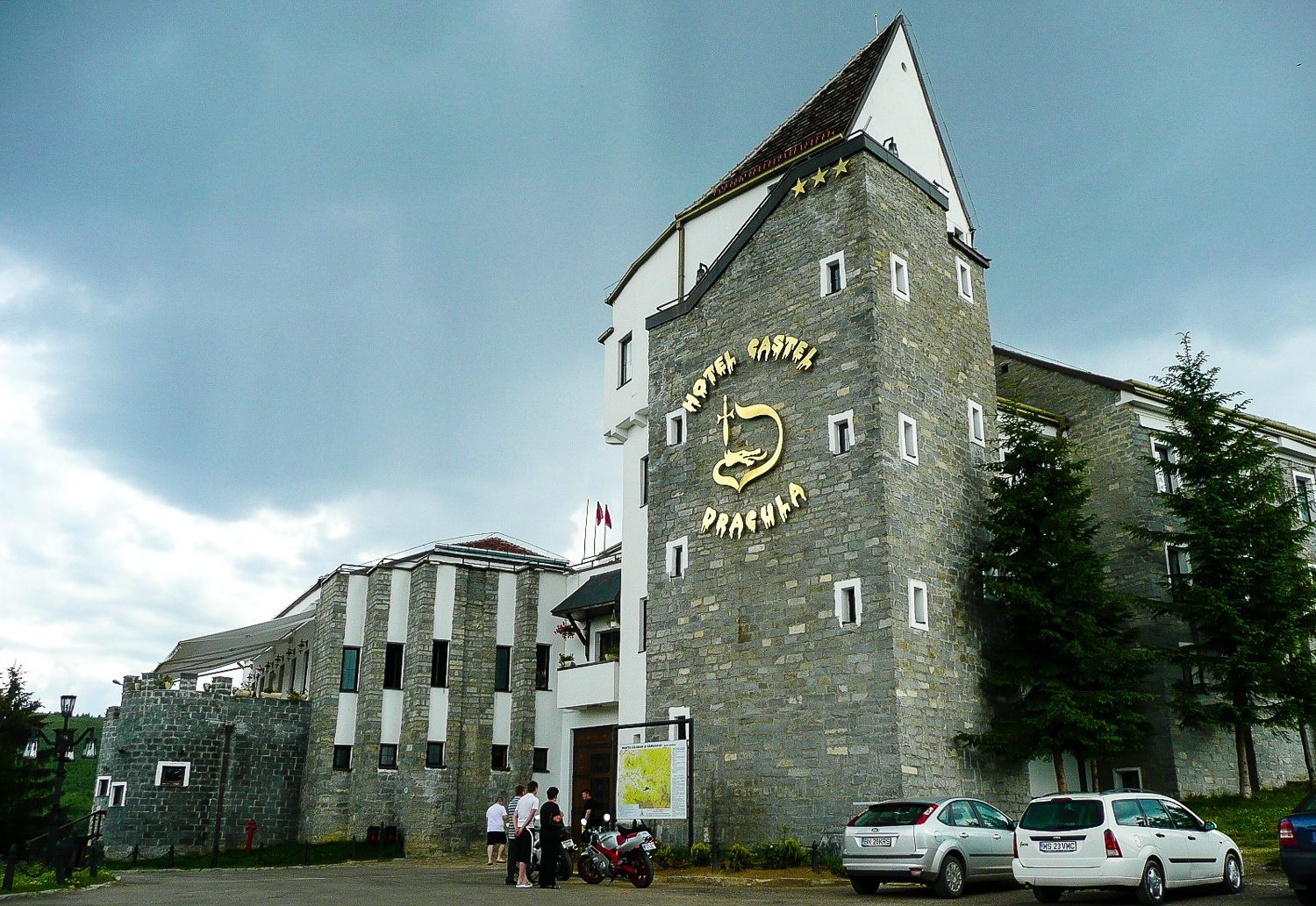 Hotel Castle Dracula, located on the Borgo Pass, for the vampire fans.

TT: How did you find the money to fund your travel?

L: Since 2003, most of my travel has been designed around my career, first as an aspiring travel writer, then as a prolific freelancer and now as a travel and tourism marketing professional. Starting out, I was lucky enough to sell my house for a large profit (pre-housing crisis), which allowed me to travel comfortable for a few years without having to worry about funds. By the end of my second year, I was making a sustainable income for my nomadic life. By the third year, I was earning enough to move back to the U.S., though I wasn’t quite done traveling yet. ☺ 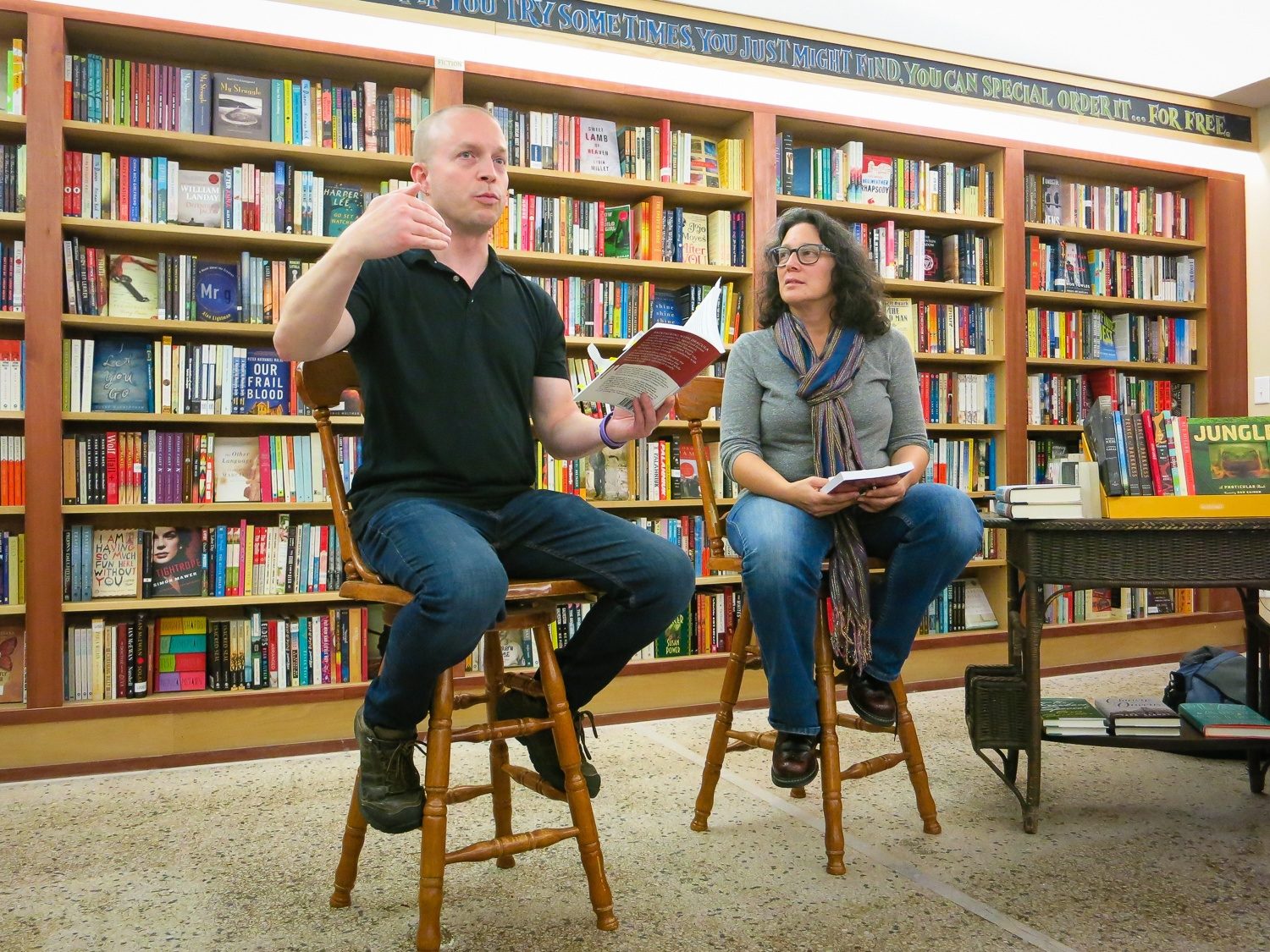 Leif at a “Backpacking with Dracula” bookstore reading.

TT: Impressive. Tell us one moment from your travels that was particularly shocking.

L: While in Australia, just 24 hours after reading about the 2004 Asian tsunami wiping out destinations I was meant to be in at the time before a major itinerary change, I was nearly involved in a major train derailment. Our train had brake problems and while we were stopped for repairs, a freight train passed us. That train later derailed down the line. If we hadn’t stopped to fix the brakes, who knows? I was unsettled for weeks. 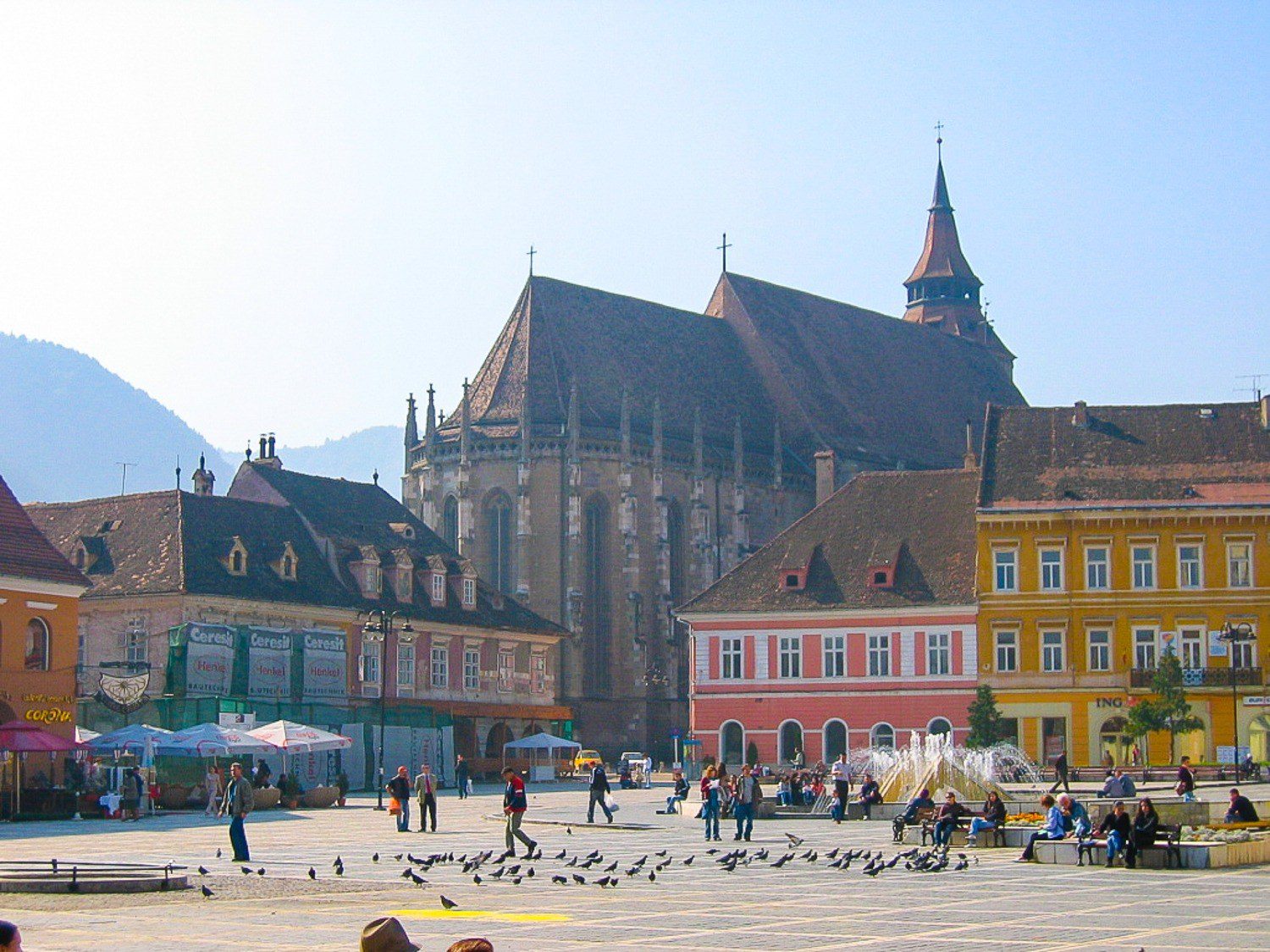 L: Travel has impacted my career very differently over time. First I was traveling just to get the cred and experience that a grizzled travel writer needs.

Later it was all about finding the story and convincing an editor to publish that story, whether it was before, during or after a trip.

The downside of this was that I felt I needed to be chasing a story on every trip I took, even if it was a vacation. This usually resulted in trips becoming more research than vacation, which naturally sucked the enjoyment out of most trips. 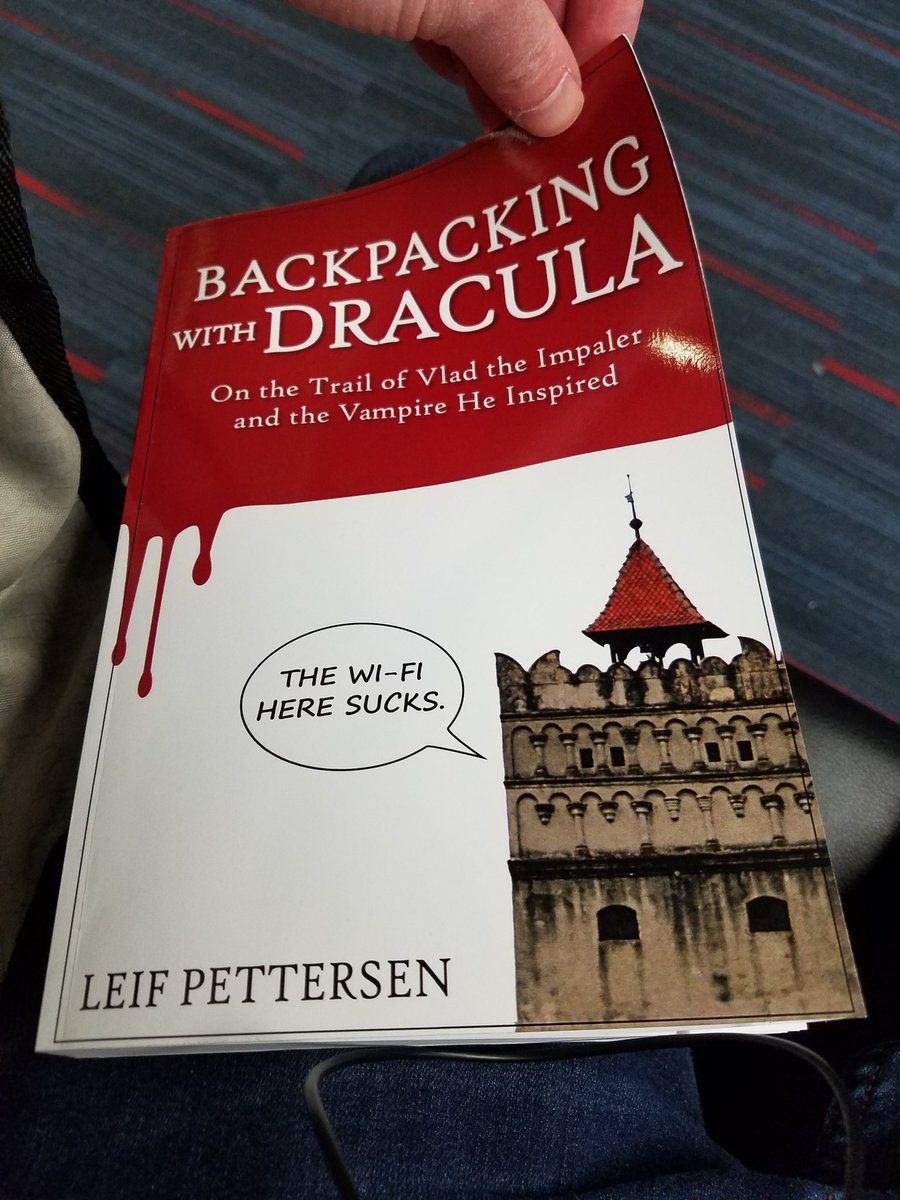 It got to the point where I had to intentionally find vacation spots where there was literally nothing to do, except eat, sleep read and walk along the beach. Thus, the do-nothing vacation was born.

I highly recommend it.

These days I either travel for work, meaning conferences – not exactly the most thrilling travel – or vacation. Striking a balance is important. To much work travel will suck travel enthusiasm out of you fast. 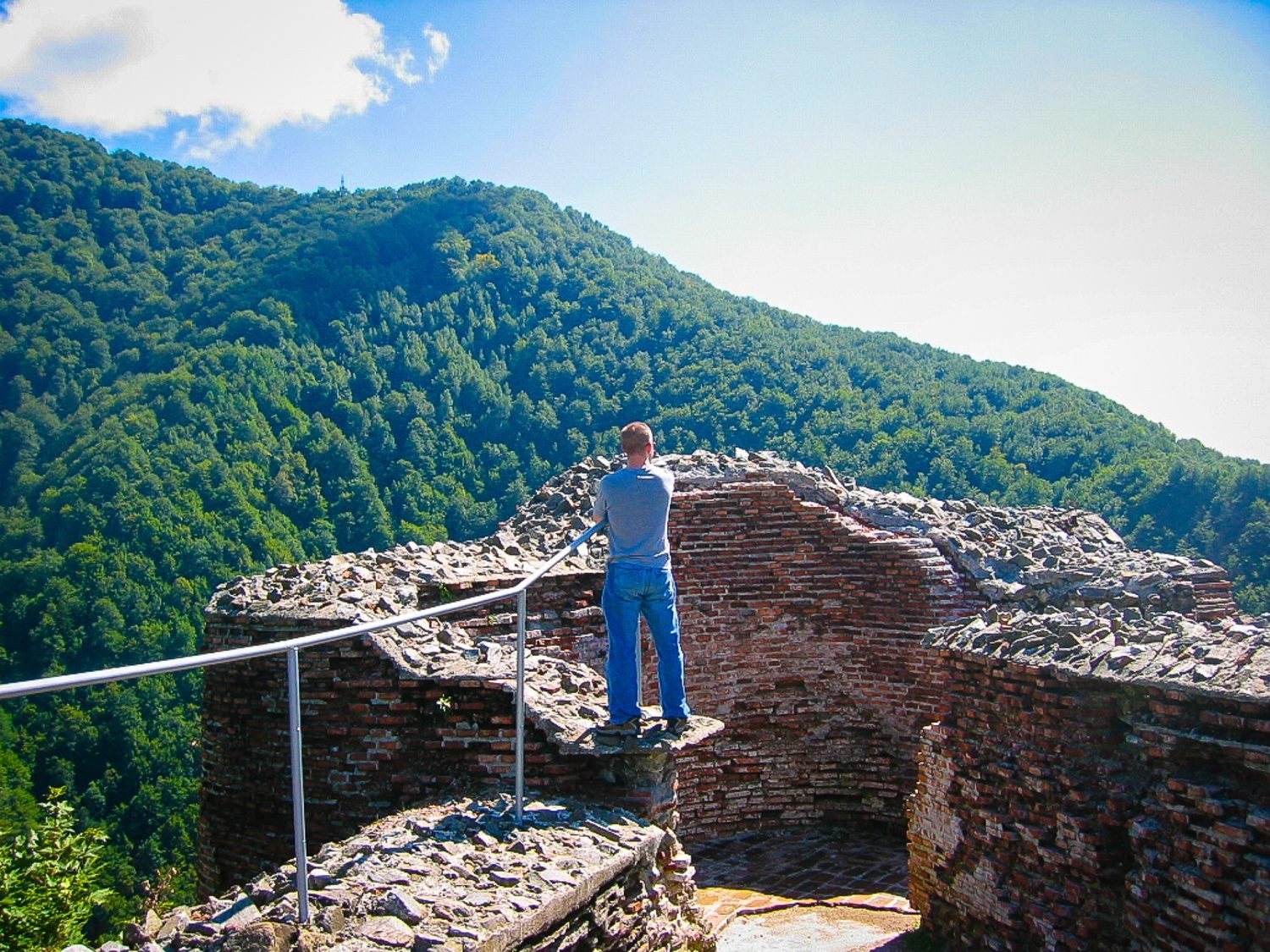 Poienari Citade: Dracula’s Castle), Romania, with Leif at the edge.

TT: What’s a fun fact about you that many people don’t know?

L: Um, that in addition to publishing a book about Dracula, I won the silver medal at the International Jugglers’ Association championships. Here’s a hot juggling video to show the moves.

TT: Hah! Thanks so much, Leif. Readers, do check out “Backpacking With Dracula” and the fun video for its book trailer. Now, what questions or comments do you have for Leif?

This turned out great! Thank you, Lillie!

I see it's already taking off and being read left and right, so I'm thrilled we got it up!