Teaching and Volunteering in Korea, Cambodia, and Ukraine 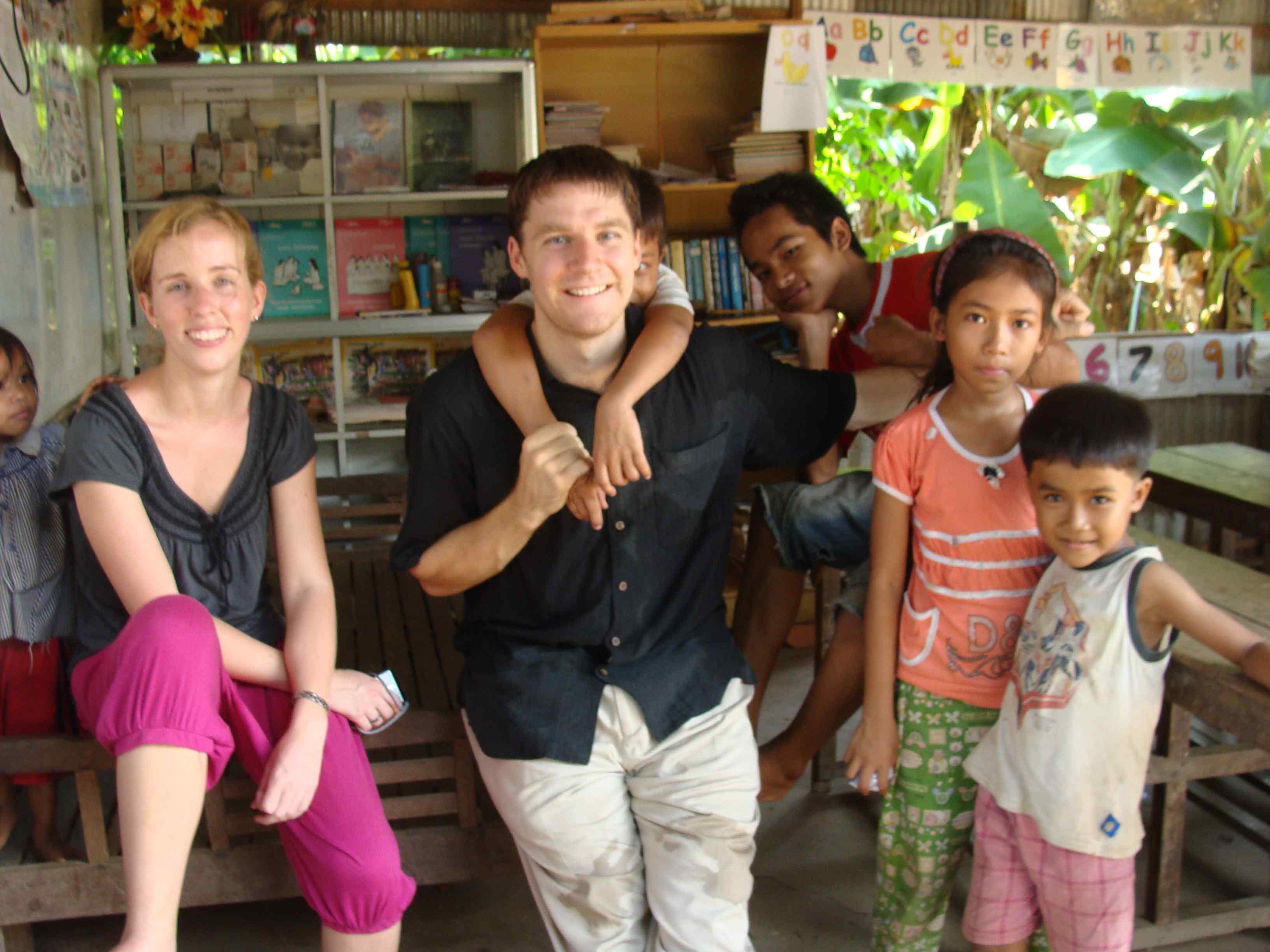 Emily and Steventeacher with kids in Cambodia.

TeachingTraveling.com: Here’s a great account from Steve Sirski, who has been an ESL teacher, filmmaker, and scholar in South Korea, Cambodia, and Ukraine!

Steve, tell us a bit about your background.

Steve: I’m from Winnipeg, Canada and I’ve been teaching English on and off for the last three years. I’ve recently returned to Canada from Ukraine where I was doing some family roots research and teaching English in Kharkiv. I may stay in Canada for the rest of the year but I’m planning my next journey already.

Before traveling and teaching, I was a full time student studying Classics, filmmaking and ancient languages at the University of Manitoba with the view of becoming a professor. While attending university, I was also working (sometimes all at once) as a basketball official, in a corporate job, a filmmaker and as a drummer (both in a rock band and a Ukrainian polka band).

All of that work kinda got to be a little much to handle and I thought it was time for a change. So, after I graduated with a MA in Classics, I decided to see what the life of a backpacker and English teacher is all about. On January 1st, 2009, I began my first backpacking trip throughout Western Europe while waiting for my Korean paperwork to clear. The next month I flew to Busan, South Korea to teach for the first time. 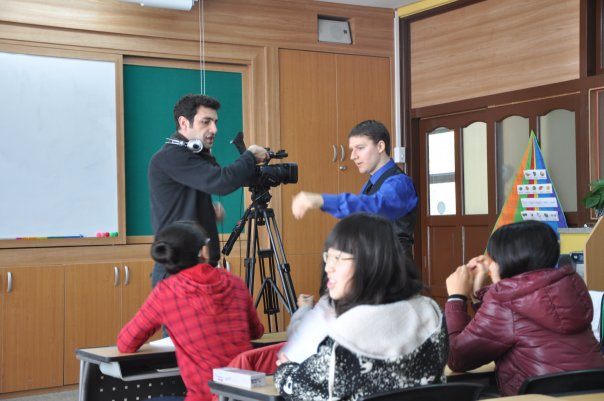 Murat and Steventeacher set up for a film shot in South Korea.

TT: Amazing! Tell us some highlights of your travels and teaching around South Korea and other countries you visited.

S: For South Korea, a highlight would be making a short film with my Grade 6 Advanced English class, which was then screened at a Korean film festival the next year. I wrote the script with a friend of mine who was attending Kyungsung University in Busan and then turned it into an educational tool for the kids. The students read the script and made the storyboards, which you can see at the end of the movie.

Cambodia was a very humbling experience. The country has had such a troubled past and I knew next to nothing about it. I was working at the SFODA orphanage there and was amazed that these kids could still laugh and play.

It was as if they were one big family and all the cares in the world didn’t matter when they got together. I particularly remember a lesson in which we talked about the languages of the world. I would draw some squiggles on the board and have the kids guess what language it was.

They laughed when I told them what the Khmer language looked like to me. Teaching in Cambodia really opened my eyes to the power of laughter and how it can be used not just for education, but in everyday communication. 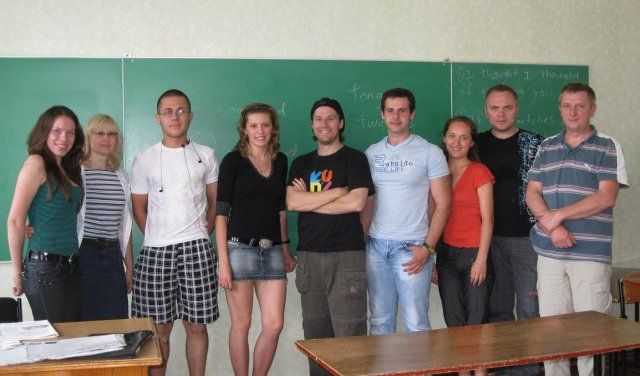 For Ukraine, it was researching my roots and learning that the reality of the country is much different from what I imagined it would be while growing up in Canada. It was both heart-breaking and fascinating to go to the country and see what my grandparents had left behind. The country is going through so many changes and I look forward to going back and seeing how it develops over the next decade.

TT: So powerful. How did you find this teaching travel opportunity?

S: For teaching English in general, I bumped into an old friend at a restaurant and we got talking about what we were doing. He said he was back from Korea for a few weeks and would return to teach English. From there I learned about the Korean government’s EPIK program and did that for a year.

For Cambodia, I went through a volunteer agency that placed me at the SFODA orphanage in Phnom Penh. As for Ukraine, I found the position on Dave’s ESL cafe, though once in the country I realized that there were a lot more opportunities in the country than are advertised on the internet. There are a lot of volunteer placements available in Ukraine, particularly if you’re a student, but there are jobs that pay if you look for them. 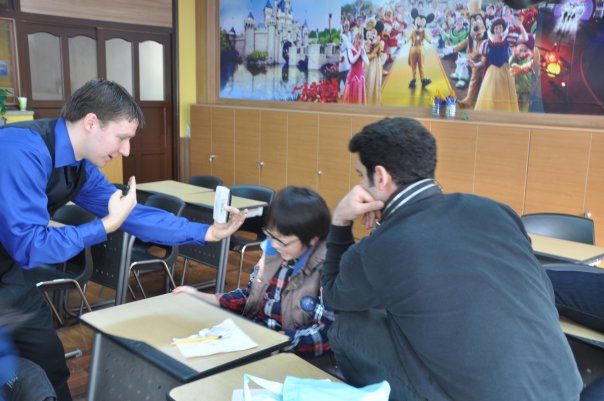 Take 17 of the film in Steve’s class in South Korea! Seung Jae can’t help but laugh when Steventeacher tries yelling at him.

TT: That’s a fantastic tip. How did you find the money to fund this travel?

S: South Korea paid for itself, and for Cambodia, but Ukraine’s expenses were paid with savings and work in the country with additional financial support from my family to research our roots.

TT: Tell us one moment from your travels that was particularly powerful, interesting, or funny.

S: Explaining that Winnie the Pooh is named after my hometown, Winnipeg. I don’t think the kids in Korea or Cambodia understood what I was talking about, or cared. But they liked the stuffed Pooh doll I brought.

TT: Hilarious. :) How have your travels impacted you as a teacher or in your current career?

S: Although writing, music and movies still remain important in my everyday life, I consider teaching English to be my primary job.

Far from “taking a year off from real life,” teaching and traveling has exposed me to a whole new way of seeing the world. The journeys inspire my film and music work. I’ve been exposed to all sorts of music, traditional and contemporary, from around the world which has helped me grow as a musician.

As for film, I’m simply stunned by the power of film to educate and entertain around the world. It’s amazing to see how movies and movie making, made into a commodities by Hollywood, can become a very useful tool for teaching everything from reading and comprehension to listening and speaking. It’s simply been an amazing, eye-opening journey. 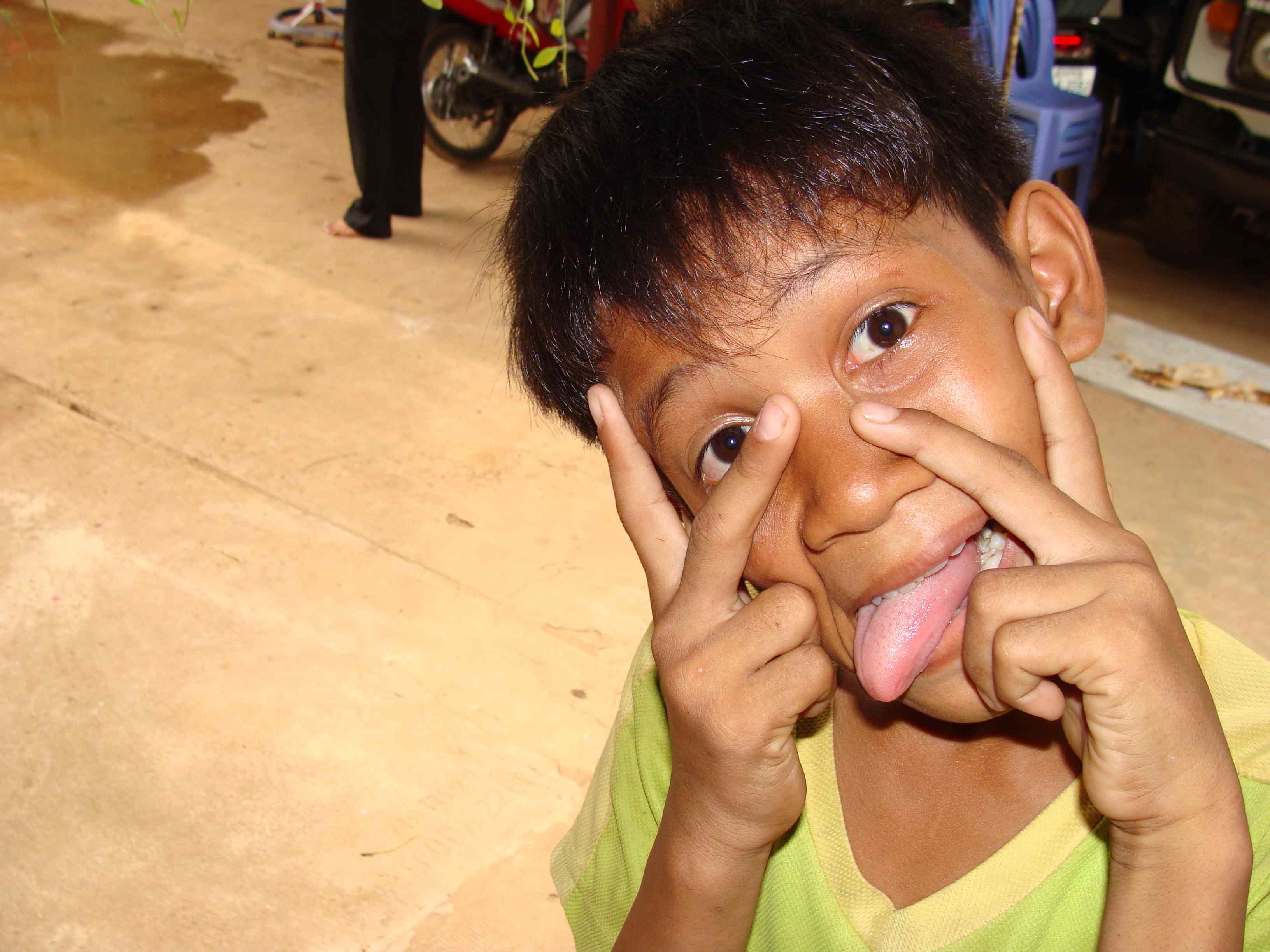 Fun after English class in Cambodia!

TT: Absolutely. How have your travels impacted you as a person?

S: I laugh a lot more, especially when difficulties arise. When in difficult situations I like to think ahead to the future, “Remember that time when….” and fill in the difficult situation. I’ve also learned that my life and the jobs I work are my responsibility, not anyone else’s.

As a result, I believe it’s important to do what you love and to do your best in any situation. I love learning, not just about myself but about the world as a whole. I’ve found that travelling offers a very different type of education than university.

TT: What advice do you have for other educators who are dreaming of travel?

S: If you’re worried about going abroad for the first time, understand that your time abroad will go by faster than you can imagine. Plus, if you don’t like it, you can always leave. It’s difficult to even describe the multitude of opportunities out there, but it takes time for it to sink in. With that in mind I’d give the same advice as my parents have given me in support of my travels, “Go!”

TT: Thanks so much, Steve! Readers, what questions or comments do you have for this great Teacher-Traveler? 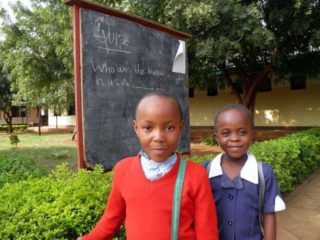 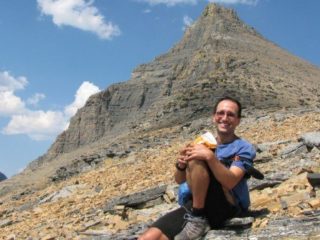 You should look into working with the English Opens Doors Program in Chile. You can come and teach for 5-9 months. For more information about the program check out www.centrodevoluntarios.cl.

I really want to be immersed in a new culture and hopefully make a bit of money on the side but I've been on the fence about committing to a year of esl teaching...this article is really inspirational and I think I'll take the plunge and try it out!

So exciting! Please keep us posted!

Hello, I am Babelyn Ababa and I am an ESL Instructor. I am most impressed by the info provided by the author. Great work!!!

And I would like to take the privilege to inform my fellow ESL instructor that a great opportunity waiting for them at GLN IELTS Review Centre in Hanoi, Vietnam. So best wishes to all, Babelyn Ababa. Just check out the link below for any further details: http://www.teachergig.com/1836/vietnam-head-teacher-position/

Great work Steve! Your next adventure teaching should be in Chile with the English Opens Doors Program!

This is a very inspirational article. I am a "teacher in-training" as I would like to say and I am always on a mission to better myself and the people around me. I am always trying to find ways that I can do that and I thought "why not go overseas and teach something." Even if it is for a few months, a year, or many years if it is something that I love. My hat is off to you Steve. You really do make me want to just "Go!"