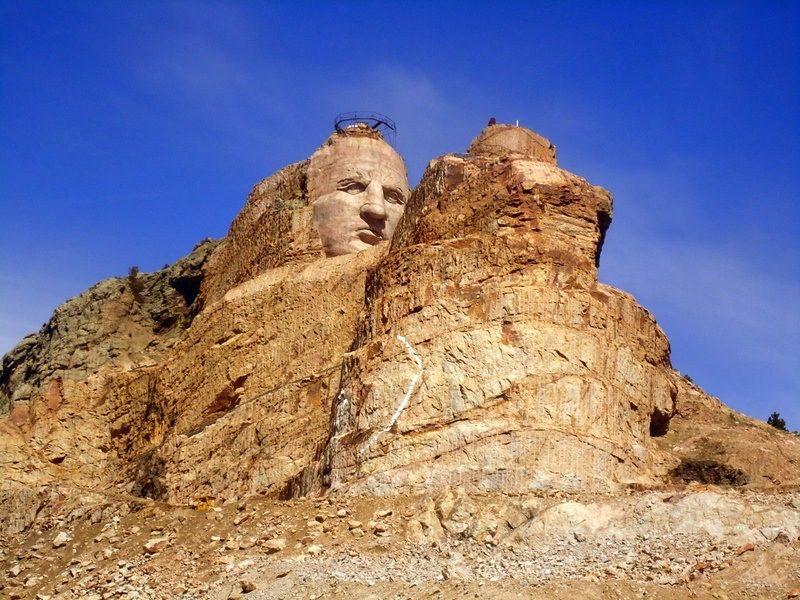 The Crazy Horse monument, conceived to “show the white man that the red man has great heroes too.” No government funding is taken to build it.

What about traveling to a different country within your own home country? In this fascinating piece, Bostonian Mark Henderson describes the different world of the Native American reservation in South Dakota where he is an Americorps VISTA volunteer.

Take it away, Mark!

Traveling around the world to me is like trying to feed an endless hunger. I’ve always wanted to travel and I still do. I know that in my lifetime I’ll never be able to see everywhere that I want, but I’m going to try anyway, because I just don’t know what else to do with myself.

So far, I’ve been to Germany, Ireland, Italy (twice), Ukraine, Mexico, Jamaica, and St John. However, right now the focus of my travels is South Dakota, right smack in the middle of America’s Great Plains.

I am currently serving a year as an Americorps VISTA on the Crow Creek Sioux Indian Reservation in South Dakota. For those of you who don’t know, Americorps is best described as “like The Peace Corps, but domestic.” I am working to fundraise, find volunteers, and build capacity for the Boys and Girls Club of Three Districts. 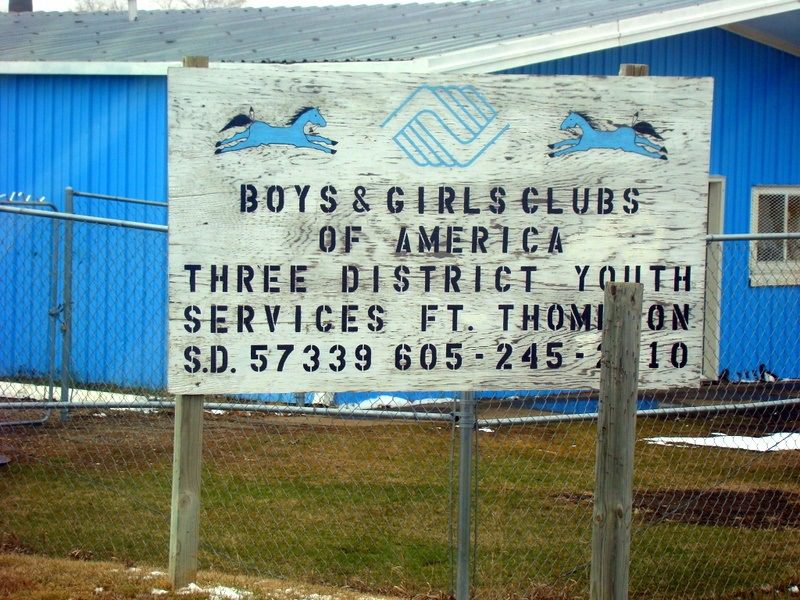 The Boys and Girls club sign in Fort Thomspon, on the rez.

If you had asked me about this a year earlier, this wouldn’t have been in the cards at all. I was running my own web development company and contracting at a popular video game company in Boston. Things were going well but there was definitely something missing – basically I was just a middle- class white dude helping other middle-class (sometimes upper-middle class) white dudes make more money.

I don’t want to pooh-pooh it too much – I was able to travel more and I got to generally do what I wanted when I wanted. But something interesting happened; as I grew more and more disillusioned with my current path, I grew more and more interested in Native American culture, advocacy, and affairs. One book in particular called “Neither Wolf Nor Dog” by Kent Nerburn really helped to cement it in.

Long story short, I found a way to get out here myself and help out. At the time of this writing I will have been here about two months. So far, I’ve learned more than I could have even imagined, and experienced things deeper than I have half way around the world. 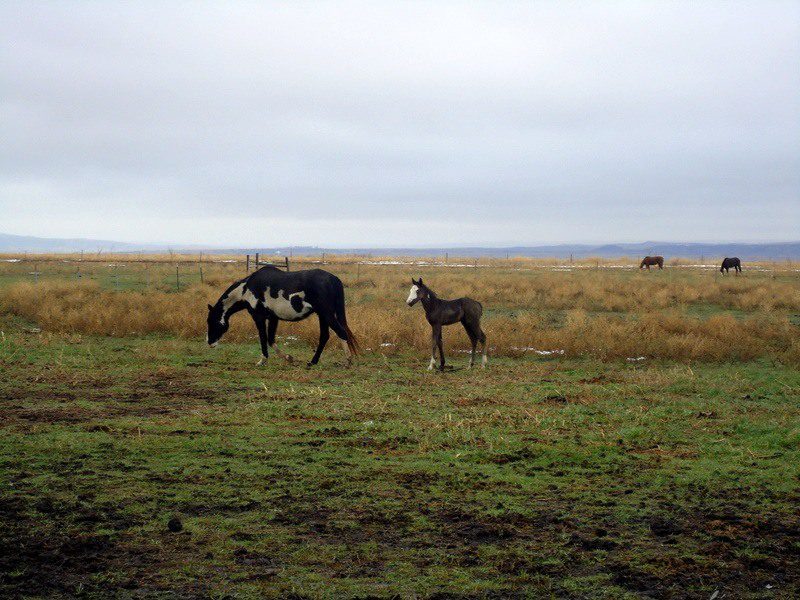 Some of the horses on Mark’s supervisor Ronda’s ranch. The little one is named Jenny, after the previous Americorps VISTA that Mark replaced.

Enough about me, though. I have two stories about Crow Creek to tell.

Diane Long Fox teaches an entrepreneurship class in Fort Thomspon, the major population center of Crow Creek. She asked me to sit in one day. I barely said a word but I got to hear this story, told by a native man who wanted to start a plowing and towing business on the rez:

“One time I was out on that highway during a blizzard. I saw about seven cars backed up and I got out to try and pull people out and get people to safety. I saw this one woman from [nearby town] there and she was pregnant. She was from a different family and her family didn’t get along with my family but I knew I had to help her anyway. I got to the car and just as I thought she said “Don’t touch me!” because she knew who my brother was.

I said to her “I don’t care what you want! All I care about is that little baby and getting you to safety! You can cuss me out all you want but I’m getting you out of here.” Sure enough, I got her out and for two years she would avoid eye contact whenever she saw me out, avoided talking to me. Finally she came around and said thank you, and sorry. All I told her was that there were thirteen people in my family, and we’re all different people with different points of view.” 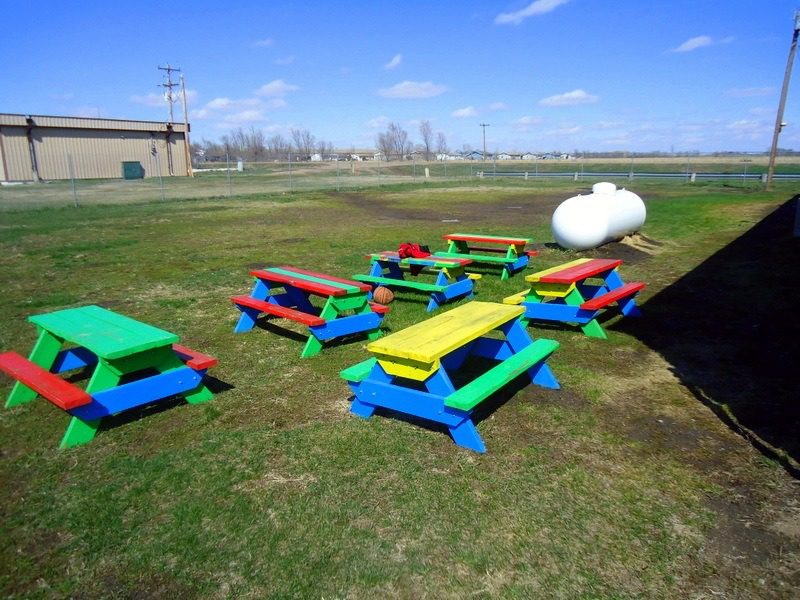 Colorful picnic tables in the back yard of the Boys and Girls Club of Three Districts.

As you can see, here on the reservation the clan ties run deep, and loyalty to your family is everything. Here in the poorest place in America, your extended family is often all you have. However, these ties lead to so much more than just feuding between clans, as the next story shows.

Before me, there was a VISTA named Jenny. She left behind a legacy of service that I would be lucky to honor. I got to work with her for a week or so before she left, and then I got thrown head first into the storm. My first week there, the regional director of the Boys and Girls Club came to town and raised hell. Annual fees were missing. Grant reimbursements were late. What the hell was going on down in Crow Creek?

The next day I was all business. I got into “CEO mode” and told my supervisor what we needed to do and wasn’t going to take any excuses. However, she was nowhere to be found most of the morning. She had to run an errand, she had to move some stuff, anything but get the paperwork done. I finally got to see her in person and she had the audacity to ask “Are you overwhelmed?” 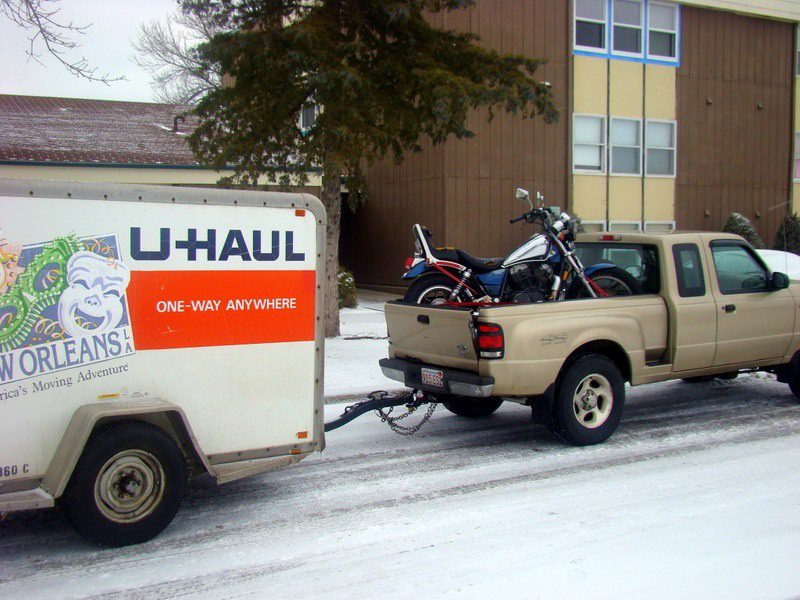 “Yes!” I said. “and the fact that you’re NOT stressed out is making me MORE stressed out.”

“I am stressed out!” she replied. “I have to get all the food ready for Jenny’s going away party and I still need to find her a star quilt.”

I was calming down, but still… “A star quilt?”

“Yeah, that’s how our people thank somebody for a job well done and send them off on their journeys. It’s really important and usually they’re $200 unless you can find somebody to give you one. You’ll get one too at the end of your year.”

I would be willing to bet that a large number of people reading this might think that this was irresponsible on her part (and mine), but when I told Jenny this story later, she just smiled and said “That’s Crow Creek right there. Their relationships are so much more important than their businesses.” 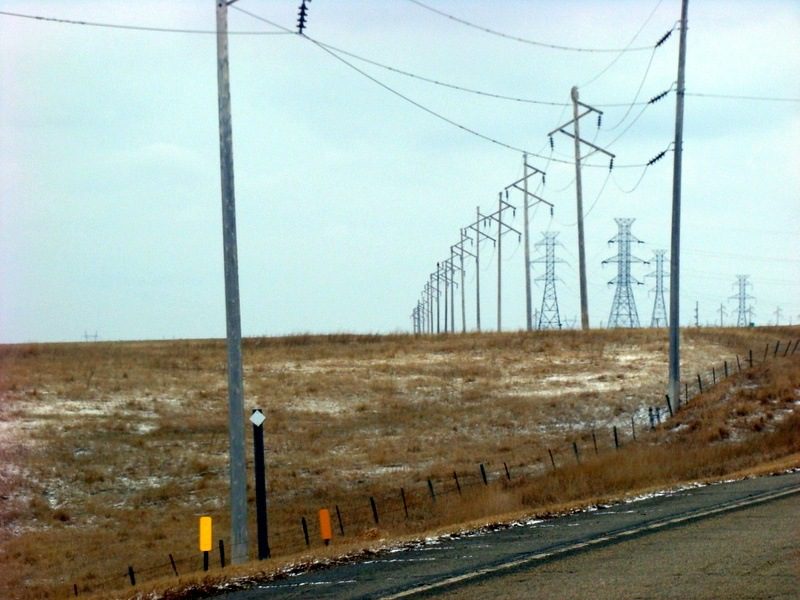 The area surrounding Crow Creek is very remote and empty. The biggest structures are these power lines coming from the dam in Big Bend.

The grants got done, the dues got paid. All that stuff worked itself out just like it does for most everything. Most importantly, Jenny got her quilt… and that feeling will last much longer than the passing year when the next annual dues need to be paid.

Those are my stories, and I’m sure there will be many more to come. Those alone have already got me searching within myself to see if I’m even capable of understanding those connections and that kind of compassion. When you come from a world where business is king it’s hard to step back and invest in your own relationships more.

As far as advice about traveling goes: DO NOT LISTEN TO PEOPLE WHO HAVEN’T BEEN THERE ALREADY. Everybody’s got their warnings about where you’re going to go, based on what they’ve heard or seen on TV. Everybody’s also got an opinion about what the people are going to be like. Unless they’ve been themselves, and in the last 10 years or so, it’s probably exaggerated or just simply not true. 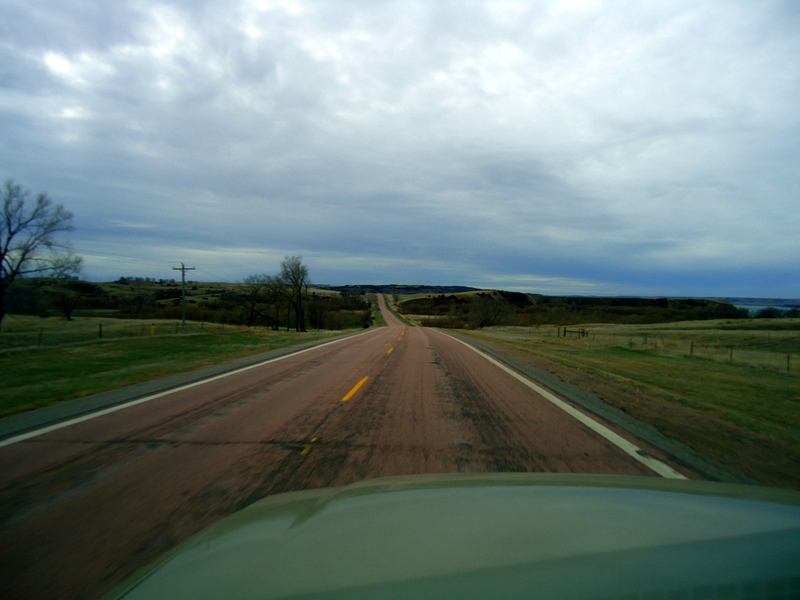 A green, scenic ridge south of Crow Creek on the way to Chamberlain, South Dakota.

For example: I consider the reservation and Eastern Europe to be the two most “exotic” places that I’ve been to, and in both places I’ve found most of the people to be perfectly friendly, reasonable and helpful despite whatever ignorant warnings I received before going there. Was I nervous? sure.

Did I feel out of place? Of course. The truth is you can run into trouble if you go looking for it, but you can do that in Boston, New York, or even a lot of smaller towns in America. The trick is just to be considerate, laid back and show the people that live there that you mean them no harm. Let people go about their business, and you go about yours.

Thanks so much, Mark! Readers, Mark Henderson is a musician, web designer, Americorps VISTA, and a blogger! His blog is over at http://ahorseisnotahome.wordpress.com and you can reach him at henderson.mark [@] gmail.com . What questions and comments do you have for him?

Wow--the star quilt story is very powerful. Thank you for sharing. It sounds like you've landed in a place that will give you what you need right now.

I'm visiting South Dakota this summer--for far too short of a time. I wanted to incorporate a Native American aspect into my trip (and into the larger trip it is a part of; a months-long trip around the US) but I knew that doing so as a tourist would not give me the perspective I'm seeking. Your work with Americorps is giving you that perspective; what an amazing experience.

Thank you for your kind words. My term as a VISTA has since ended and I'm back in Boston now. However, what you say is true - my experiences and perspective has changed completely and I'm probably an entirely different person than when I left.

Some things to see in South Dakota: - Pine Ridge / Whiteclay (kind of an intimidating drive but necessary to gain perspective. - the Big Bend Dam - The Oahe dam north of Pierre - the badlands (of course) - Rushmore and Crazy Horse - Spearfish Canyon

Let me know if I can be of any more assistance :)